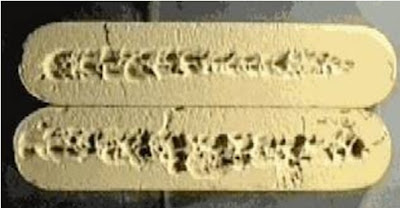 Acids useful in the stimulation of wells for their efficiency in dissolving minerals and the formation of foreign materials to it, such as sludge injection, clays and carbonates that may have been introduced during drilling and / or completion.

Efficiency in the dissolution of these minerals and materials will depend on the increase achieved in well productivity.

Are classified into 3 main:

1. ACID WASHING
It is an operation to remove acid soluble deposits on the walls of the well or to open holes sealed.

Place a small amount of acid compared to the treatment area, allowing it to react without external agitation.

Sometimes, under pressure enters acid 1 foot or more to accelerate the process of dissolution.

2. MATRIX ACIDIFICATION
Is the injection of acid formation at lower pressure to fracture it.

Successful treatment depends on the acid in radially expand within the formation. It is in widespread use when you can not risk a hydraulic fracture due to intercalations of clays or other barriers to be protected in order to minimize entry water or gas.

3. ACID FRACTURE
Consists of injecting acid at a pressure high enough to produce a hydraulic fracture treatment or training to open and communicate existing fractures.

It reaches this kind of stimulation are obtained when the flow channels of high conductivity that remain open after treatment.

An acid to be appropriate in the stimulation will:

Acids currently used can be classified as:

HYDROCHLORIC ACID
Fully ionized and is considered a strong acid.

The main disadvantage is its high power HCl corrosion in the well and pipes and high toxicity in humans. In the majority of treatments in carbonate formations using HCl in a solution of 15% by weight in water. This concentration is called regular acid and was used mainly by the lack of corrosion inhibitors and the difficulty in preventing it.

Currently, the development of corrosion inhibitors, are used higher concentrations of acid

• The reduced HF bentonite particles containing drilling muds.
• It also presents the ability to dissolve clays (silicates) and sand (silica).
• Clays are dissolved faster than the sands under the terms of use. The HF reacts with all components of the sandstones, although his reaction to the carbonates is low relative to HCl

* This mixture of 2 acid is used almost exclusively in sandstone stimulation.
* The most appropriate concentration of HF is 3%, higher concentrations have shown that the pumping into the well pressure increases and decreases the permeability of the formation.
* The corrosion characteristics of HF-HCl mixtures are comparable to those produced by HCl, being therefore used similar corrosion inhibitors.

* The HF is mixed with HCl, according to the already seen, the following purposes:

* Acidification in sandstones are intended to restore the original permeability of the same.
* The main damage is given by the swelling of clays
* As montmorillonite clays swell on contact with fresh water or low salt content in solution.
* Contact the clay with water may be due to:

* The mixture of these 2 acids (HLL-HFL) is due to its ability to dissolve clays contained in the drilling mud. Furthermore, both react with most of the components of the sandstones, silica, feldspar and limestone materials.
* The penetration of acid into the formation is assumed to be radial and contact with a large rock surface. Increased consumption of it is done within walking distance of the well, as a result of its high reaction with clays.
* According to Morris Muskat, the relationship between the productivity index damaged and undamaged, for a radial system is:

The aim of this type of treatment is to inject acid into the fracture created in the formation at a pressure high enough to open natural fractures or fracture-break-training. The method is widely used in dolomites.

Initially, a cushion of fluid is injected at a rate higher than the parent can accept so as to cause an increase in pressure high enough to overcome the compressive land and tensional stresses in the rock. At this point, training fault rupture and form a fracture.

The injection rate must be high enough and the formation permeability is low enough so that the fluid loss is not excessive so that the pressure may increase enough to fracture the formation or opening existing natural fractures.

Acids are used to record the faces of the fractures they are not promoting partners through the creation of channels or «worm-holes» to prevent complete closure in carbonate formations. The recorded fracture acts as a channel of high conductivity to move fluids to the vicinity of the well more easily.

In wells with low to medium temperature control fluid loss of the acid is the most important consideration. In high temperature wells, the effective penetration distance of the acid is limited by rapid consumption, therefore, should be used retarded acid (gelled and / oreticulados).

The acid used is HCl. High reaction of this acid with limestone and dolomite results in the formation of large flow channels, called «worm holes» (worm holes). The penetration ranges from a few inches to several feet.