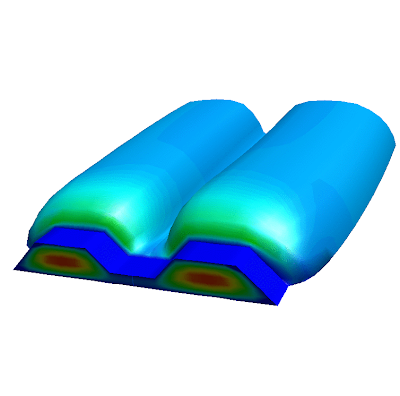 The viscoelastic surfactants are a class of compounds in aqueous solutions can form micelles in the presence of counter ions, increasing the viscosity of the fluid. When the solution containing the surfactant reaches a critical concentration of counter ions, micelles are linked together, stretching and taking shape as a worm. To continue increasing the concentration of counter ions, these worm-like micelles are entangled, forming a three-dimensional array (3D gel). The counter ions can be delivered to the solution of inorganic salts, organic salts or other chemical species that dissociate in water and have opposite polarity to that of surfactant.

The viscoelastic surfactant most commonly used until recently have been the quaternary amines, known as VES. Cationic in nature and used as counter anions preferably chlorides (potassium, ammonium or magnesium). The VES fluid viscosity are stable and produce similar regardless of pH value (ranging from 3 to 11).

The rheological properties of viscoelastic gels are different polymer systems.

However, a few surfactant systems produce extremely low friction pressure in the pipes (at cutting speeds between 170 and 8000 sec-1).

Due to the arrangement shaped like a worm, viscoelastic gels have excellent ability of particle suspension.