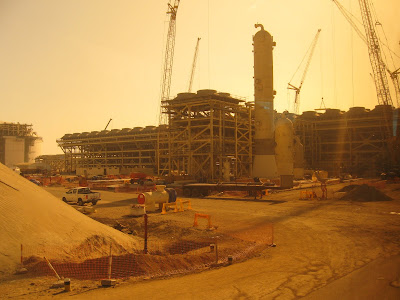 Methanol can also be converted into two: ethylene and propylene through a process known as conversion of methanol to olefins. Ethylene and propylene can also be produced directly from ethane, propane, butane and other compounds separated from natural gas or naphtha produced from crude oil. Ethylene and propylene are relatively stable compounds that can be transported by pipeline or special vessels for petrochemical plants that turn into a variety of materials such as polyethylene, PVC plastics, resins, antifreeze, paints, automotive components, materials packaging, textiles, and countless other specialty plastics and foams.

Over 97% of world synthetic fertilizers produced from ammonia produced synthetically derived from natural gas. The process requires relatively high temperatures and pressures, and therefore requires cheap energy to be economic. The natural gas, with its relatively inexpensive price, provides energy and raw materials for processing.

The steel industry is the single largest industrial consumer of energy, absorbing approximately 4% of global energy production. In developed countries, the cost of energy is between 15% and 20% of total steel production. The modern method of direct reduction of iron to produce steel directly removes oxygen by reacting the ore with a hydrogen-rich gas and CO-produced by catalyzing rich methane from natural gas. As in the production of fertilizers, natural gas provides the energy and raw materials for the process