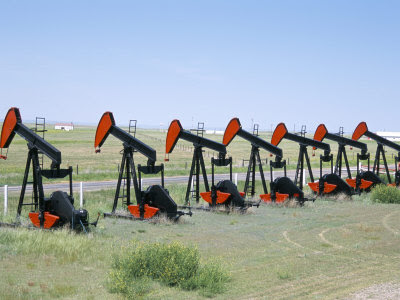 ROLE OF THE SUBSURFACE PUMPS

* Allowing the formation fluid
* Raise the fluid admitted to surface

COMPONENTS OF THE UNDERGROUND PUMP

Parts of the subsurface pump

The principle of this pump is positive displacement piston-cylinder type.

At the start of the upstroke, after the piston has reached its lowest position, the traveling valve closes due to high hydrostatic pressure in the pipe above it. Liquid contained within the tubing above the traveling valve is raised to surface during the upward movement of the piston. At the same time the pressure drops in the space between the stationary and traveling valve, causing the stationary valve is open. The pressure in the wellbore fluid moves through the formation of stationary valve inside the barrel under the piston. Raising the liquid column and filling the barrel with the formation fluid continuously until the end of the upstroke.

After the piston has reached the top of his career, the rod string begin to move downwards. Start the downstroke, the traveling valve opens immediately and closes stationary. The operation of the valves is due to the incompressibility of the liquids in the barrel. When the traveling valve opens, the weight of the liquid is transferred from the stationary piston valve, causing a tightening in the pipeline. During the downstroke, the piston makes its descent to the open traveling valve to fill the barrel with the formation fluid. At the end of the downstroke, the direction of movement of the rod string is reversed and another pumping cycle begins. The weight of liquid is again transferred to the piston, causing the rods to stretch and return pipe to its original length.

PARAMETERS IN THE DESIGN OF AN UNDERGROUND PUMP

1. Well Depth
2. Pump desired depth (depth of the seat or nipple pad)
3. Size of the lining (casing)
4. Pipe size
5. Static fluid level
6. Dynamic fluid level
7. ° API gravity of fluid
8. In% water cut
9. Record for corrosion and that percentage
10. Note if there are contaminants such as sand
11. Desired output in barrels per day because of the pump volumetric efficiency in%
12. Note if the well is deflected
13. Downhole pressure
14. Maximum stroke unit
15. Strokes per minute unit
16. Unit capacity in pounds
17. Maximum Torque drive

1. Select type of subsurface pump (R or T)
2. The size of the pump
3. The design of the rod string
4. Daily production
5. The maximum and minimum load Varillon
6. Maximum tension rods
7. Maximum Torque
8. Minimum power in Varillon