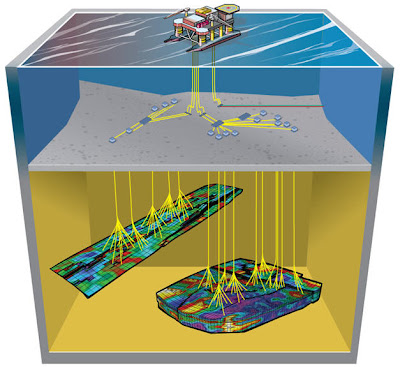 Reservoir Simulation has been practiced since the beginning of Petroleum Engineering. In the early 40’s, the potential reservoir simulation was recognized, and many companies started the development of analog and digital models in order to improve the existing analytical solutions (calculation of material balance and displacement 1-D Buckley- Leverett).

In the early 50’s, were carried out research in regard to numerical solution of flow equations. As a result, computer programs were obtained for reservoir simulation, although simple but useful. These programs represented a major advance and used the solution of a set of finite difference equations to describe multiphase flow 2-D and 3-D heterogeneous porous media. It was the first time Reservoir Engineers were able to resolve complex problems.

In the 60’s, the development of Reservoir Simulation, was aimed at solving problems of oil reservoirs in three phases. Recovery methods were simulated depletación included various forms of pressure and pressure maintenance. Developed programs operating on large computers (Mainframe) and used cards for data entry.

During the 70’s, the trend changed abruptly due to the growing body of research on processes EOR (enhanced oil recovery), advances in simulation techniques and the decreasing size and increasing speed of computers.

The mathematical simulations were developed so that processes involving chemical injection, steam injection and combustion in situ. Research during this period resulted in significant progress as regards the physical characterization of hydrocarbon in the movement under the influence of temperature, chemical and multicomponent phase behavior.

During the 80’s, the range of applications continued to expand reservoir simulation. The reservoir description moved toward the use of geostatistics for describing heterogeneities and provide a better definition of the reservoir.

Technology was developed for modeling naturally fractured reservoirs, including compositional effects. Also, hydraulic fracturing and horizontal wells and its application to reservoir monitoring. At the beginning of this decade, the applications were made on large computers (Mainframe) at the end of the decade began using microcomputers.

Currently, personal computers and a large amount of reservoir simulation systems, provide the Engineer, an economical and efficient to solve complex problems of reservoir engineering.

Recent advances have focused mainly on the following points:

Referring to the description of the site, stochastic techniques are being applied supported on the following:

Reference to naturally fractured reservoirs, simulation applications has been extended to compositional and cyclic steam injection.

With regard to hydraulic fracturing has been emphasized in the prediction of fracture geometry. Several techniques are available to predict the stress distribution in situ, thus improving the simulation of fracture growth in the vertical and lateral.

The objective of the simulation of horizontal wells is to study the effects of length of well inclination angle, local heterogeneity, directional permeability, barriers and pressure drop in the well. The accurate simulation of the phenomena around the well, has studied the effects of horizontal wells on productivity, intersection of fractures, tapering and recovery of hydrocarbons.