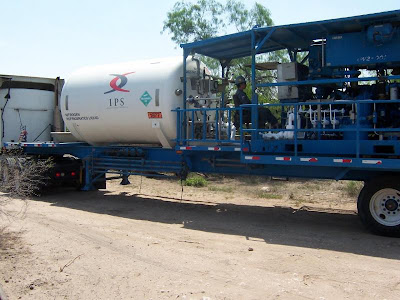 1. INTRODUCTION
The properties of a specific grout will depend on the particular reasons for the use of cement. However, there are fundamental properties which should be considered when designing any grout.

2.1. COMPRESSION RESISTANCE
Do not puncture the pipe shoe lining until the cement has been pumped has reached a compressive strength of about 500 psi. Generally, this value is considered sufficient to support a string of drill pipes and allow for progress without the hardened cement to disintegrate due to vibration. If the operation is delayed pending the cement to harden and develop the compressive strength at the location of drilling, it is said that this «waiting cement (WOC). The development of compressive strength is a function of many variables, such as temperature, pressure, amount of water added and the mixing time from the mixture.

The time to harden the cement slurry can be controlled with chemical additives, known as «accelerators Frage.»

Cements in oil
Fig 1. Test to measure the compressive strength

The time pumpability of grout is the time during which the cement slurry can be pumped and displaced within the annular space (the slurry is pumped during this time.) The grout must have sufficient time to enable pumpability be:

• Mixed.
• pumped into the pipe.
• Scroll through the drilling fluid until it is located where required.

Conditions at the bottom of the well have a significant effect on pumpability time. An increase in temperature, pressure or reduce fluid loss of time pumpability. These conditions should be simulated on the stage of design and testing of grout in the lab before they develop any operation in the well.

Figure 3 – Interior of a consistometer

The standard density of the slurry can be altered to meet specific operational requirements (a formation that has a low fracture gradient may not withstand a hydrostatic pressure grout whose density is around 15 lb / gal). The density can be altered by changing the amount of water or using aditivospara mixing the grout. The density of many cement slurries ranges from 11 to 18.5 lb / gal (ppg). It should be stressed that this aspect of cement slurries are relatively heavy, knowing that normal pressure gradients of the formations are generally considered equivalent to 8.9 lb / gal (ppg). However, it is inevitable to have a heavy grout (high density), if required to the hardened cement reaches a high resistance to compression.

Figure 5 – Variation of the weight of the cement slurry

The hardening of the grout is the result of the cement begins to hydrate with water mixture. If water is lost grout before it has been positioned in the annular space, your time will decrease pumpability and water sensitive formations may be adversely affected. The amount of water loss that can be tolerated depends on the cementing operation and the development of the grout.

Forced Cementation requires low values of water loss, because the cement should be injected under pressure that is generated by a plaster and block the perforations. The primary cementing does not depend critically on the loss of water. The amount of fluid lost from a slurry in particular must be determined through a laboratory test. Under standard laboratory conditions (1000 psi of pressure in the filtering test, with a mesh size of 325 mesh).

The formation waters contain some corrosive, which can cause deterioration of concrete. Two compounds that are commonly found in formation waters are sodium sulfate and magnesium sulfate. These compounds react with the lime and C3S sulfoaluminate to form crystals of calcium, the crystals expand and cause cracks in the cement structure. A low C3A content in cement increases the resistance to sulfate. In order to have high resistance to sulfates in cement C3A content should be between 0-3%.

After the cement has hardened, the permeability is very low.

Figure 6 – permeameter to measure permeability of the grout forged

Many cement grout containing additives, to modify the properties of the slurry and optimize cementing operations. Many additives are known by its trade name used by cementing service companies. Cement additives may be used to:

• Vary the density of the grout.
• Change the compressive strength.
• Accelerating or delaying the time sets.
• Control of filtering and fluid loss.
• Reduce the viscosity of the slurry.

Additives can be delivered to the drilling location in granular or liquid state and can be mixed with cement powder or added to water before mixing the cement slurry is mixed. The amount of additives used is commonly expressed in terms of percentage by weight of cement powder (based on each sack of cement weighs 94 lbs.) Many additives affect more than one property and therefore should be carefully used.

They are chemicals that reduce the setting time of cement slurries. Increase the speed of development of resistance to compression. They are used when the cement setting time is longer than that required to mix and move the grout.

The accelerators are particularly important in shallow wells where temperatures are low and thus the grout will take a long period of time to set. In high temperature deep wells stimulate the process of harden and accelerators may not be necessary. Harden accelerators most common are:

• Calcium Chloride (CaCl2) .- This salt is dosed from 2.0 to 4.0% by weight of cement, depending on the time that is desired pumpability. It is the product that exhibits greater control at the time of pumpability. The results are not predictable if the concentration exceeds 6%

• Calcium Sulfate (CaSO4) .- It is a material that itself has cementitious and have strong influence in expanding the set cement, as an accelerator is dosed based on how long you want and the temperature at which it will work . Its concentration varies from 50-100% by weight of cement. It should be noted that high concentrations of this additive acts as retardant sets.

They are chemicals that prolong the initial setting time of cement grout and provide the possibility of working with cement in a wide range of temperature and pressure. In deep wells, high temperatures reduce the time of pumpability of the cement grout. Retardants are used to prolong pumpability and avoid the risks of premature curing. Static For temperatures above 260-275 ° F should be measured the effects of retardants through pilot testing. The most common types of retarders are:

• lignosulphonate .- They consist of lignosulphonic acid salts of sodium and calcium. They are polymers derived from wood pulp. They are usually refined and compounds containing various amounts of sugary compounds with an average molecular weight of 20,000 to 30,000. Lignosulfonate retardants are effective with all cements and dosed in a range of 0.1 – 1.5 weight of cement. They are effective up to 250 º F (122 º C) temperature of movement in the bottom of the well and up to 600 º F (315 º C) in the mixture are sodium borate.

• Acid Hidroxilcarboxilicos .- hidroxilcarboxilicos acids containing hydroxyl groups (OH) and carboxylic (CHN) in its structure mlecular. Retardants are powerful and apply to a range of 200 ° F (93 º C) – 300 º F (143 º C). Another hidroxilcarboxilico acid with a strong retarding effect, is the citric CIDA. This is also effective as a cement dispersant is usually used in concentrations of 0.1 – 0.3% by weight of cement.

• .- Organofosfonatos apply to temperatures as high as movement 400 º F (204 º C). Show insensitivity to subtle variations in the composition of cement and tend to lower the viscosity of slurry densified.

The density reducing additives most common are:

• Bentonite (2-16%) .- It is by far the most common additive used to reduce the density of the grout. Requires 530% water of its own weight, ie 5.3 liters of water per kg of bentonite, can be dosed up to 4% by weight of cement without affecting the cement. Increased performance by the addition of bentonite can be seen in the table below.

• pozzolana .- The volcanic ash which in themselves have no cementitious properties, but mixed with cement, react with free lime cement. Can be used 50/50 blend with Portland cement. Resulting in a slight decrease in compressive strength and increased resistance to sulfates.

• Sodium Metasilicate Anhydrous .- It is very efficient and economical. It is compatible with the largest number of chemical additives, drives a variable percentage of water in accordance with the percentage used. Is dosed to 1-3% by weight of cement.

They are chemically inert, high specific weight and they handle a little water. These materials are used when performing cementing operations in areas overpressurize. The most common densificantes used are:

• Barite (barium sulfate) .- Used to achieve higher slurry densities of 18 lb / gal. They have a specific gravity of 4.23 and requires 22% of water of its own weight. The additive can cause a reduction in compressive strength and pumpability time. Is dosed for 20-40% by weight of cement.

• Hematite (Fe2O3) .- The high specific gravity hematite can be used to increase the density of the slurry up to 22 lb / gal. They have a specific gravity of five and requires 3% water of its own weight. It employs up to 50% by weight of cement, depending on the weight that is desired. Hematite time significantly reduces pumpability of the grout and also requires the use of drag-reducing additives.

Used to prevent dehydration of the cement grout and prevent premature harden. Filtrate reducers generally are products derived from cellulose. The value set by the API filtrate varies with the type of operation to perform:

The value of the filtering API is measured in cm3 to 30 minutes under a pressure differential of 1000 psi. The most common additives are:

They are chemicals that reduce the viscosity of cement grout and are added to improve the flow properties of the grout. They help to provide turbulent regimes with low flow pumping and reduce friction between grains and between them and the walls.

According to many investigations have shown that the most efficient in cleaning the mud annulus in turbulent regime is achieved, ie when the grout cleaning mattresses and move at a speed that corresponds to a number Reynolds 3000-4000 or more, depending on the rheological properties ny k.

Generally they are salts of fatty acids and are dosed 0.2 – 2.5% by weight of cement. We also have:

These agents prevent the regression of compressive strength for temperature effects. They are silicates of high purity, with a texture ranging from 100-325 mesh to have a large and homogeneous distribution in the body of concrete.

These include: Managers Expanders defoamers and the set cement. Because the rate at which cement is handled in the field when the grout is being developed (about 1 ton / min), the cement tends to trap a large amount of air, leading to an erroneous density control; also some Chemicals help keep the air inside the mixture and makes the work of the high pressure pump that handles this to be pumped into the well.

The problem is minimized by using foaming agents, which remove most of the entrapped air bubbles. They are generally acid soluble organic salts medium and dosed 0.2 – 0.3% by weight of cement.

• Sodium Chloride .- The maximum dilation is obtained by 18% by weight of water and higher concentrations obtained slight contraction of the cement.

• Potassium Chloride .- This product, in addition to being efficient stabilizer of the clays, 5% by weight of mixing water exhibits the same expansion that 18% of sodium chloride in the concrete. Another feature is that 2% by weight of water makes filtering slurries containing it is compatible with most oils.

As compounds deliberately added cement grout on the surface, to improve the properties of it, grout in contact with the drilling mud may be contaminated, when pumped downhole. Mud chemicals can react with cement to give unwanted side effects. Some of these are shown below as follows:

The mixture of sludge with cement can cause a sharp increase in viscosity. The biggest effect of a highly viscous fluid in the annular space is formed channels that are not easily displaced. These channels prevent a good cementing the walls of the pit and on pipe walls. To prevent contamination by mud cement spacer fluid is pumped through the mud and cement slurry.