The SP is a record of the terrestrial natural potential, which occur between a moving electrode into the well (A) and a fixed electrode on the surface (B).
SP Register 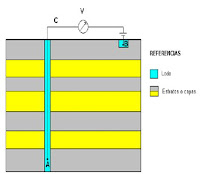 The deflections of the SP curve from the electric currents flowing in the mud pit.

The SP has 2 components: a component Electrokinetic and Electrochemical.

a) Electrokinetic Component.
This component is also known as current or potential potential of electro-filtration. Occurs when an electrolyte flows because a solution is forced by differential pressure to flow through a porous medium, non-metallic permeable (membrane). 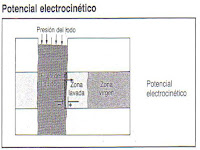 b) Electrochemical Component
This potential is produced by contact with solutions of different salinities. Contact can be direct or through a semi-permeable membrane such as shale. According to the type of contact may be potential: Potential for contact with liquid or membrane potential.

Takes place at the boundary between the area washed and unspoiled, no shale separating the two solutions. Both anions and cations can move from one solution to another.

Because the formation water salinity is higher, both the cations Na + and Cl-anions will migrate towards the mud filtrate. The Na + ion is comparatively higher and drag water molecules 4.5. Cl-ion is smaller and carries only 2.5 molecules of water. Hence, the Cl-migrate more easily than Na + ions.
The result is an increase of positive charges left in the formation water, these charges restrict the migration of Cl-washed into the area this equates to a conventional current flow in the opposite direction.

Because of the layered structure of clay and the loads on the blades, the shales are permeable to cations Na + but impermeable to anions Cl-, ie act as selective membranes so the potential across the shale is called potential membrane.

SP CURVE
Spontaneous potential curve (SP) is a record of physical phenomena that occur naturally in the rocks of a given formation or reservoir.

SP curve records the electrical potential produced by the interaction between the formation water, drilling fluid (conductive) and shales, this voltage is the result of a continuous stream that is generated in these edges by the difference in salinity.

The slope of the SP curve is proportional to the current intensity of SP in the mud of the well at that level, these currents are the maximum limits of permeable formations.

The shape of the curve of the SP and the amplitude of the deflection in front of the permeable layer depends on several factors. 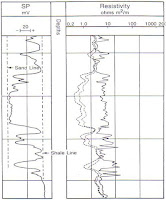 Factors affecting the distribution of SP streamlines and potential declines taking place in each of these means through which current flows of SP are: