There are several techniques for controlling sand production in horizontal wells, these can range from simple restrictions on the speed of production and changes in operational practices, to the use of expensive equipment completion, all with the purpose of controlling the movement of particle formation to the wellhead.
Slotted liners and grates are one of the easiest ways to perform traditional and sand control in horizontal wells, to be reasonably less expensive and easier to run in the hole. However, to ensure that control is effective sand grains should form a bridge openings or mesh backing, if the bridge has been formed is not stable and breaks, can become clogged over time due to the reorganization of the formation sand (natural packaging), additionally, in wells with high production rates the possibility of occurrence of a failure of the sand control device before erosion occurs puenteo.1, 2

Given these limitations, the gravel pack offers clear advantages compared to a slotted liner and a grid in horizontal wells in unconsolidated formations. The gravel pack provides support for the face of the hole, because it applies a finite effort against the formation, specifically in the gravel interface and training, which retains the same and reduce the fine to step into the package with gravel. For its part, the grids and slotted liners represent a suspended filter that puts a strain on finite training. The absence of efforts allows the formation to collapse on the grid and the particles are free to move with the fluids, causing clogging of the same and the loss of well productivity. This problem becomes more significant when formations have fine grains and a high clay content or where there are viscous fluids. In this case, the obstruction of a grid and the slotted liner is inevitable and gravel packing appears to constitute the only available technique for sand control in the long term.

Fundamentals of Packaging with Horizontal Gravel

The gravel packing in horizontal wells is operationally similar to packages with vertical gravel, however, require special attention to maintain the stability of the pit during the running of the equipment and while the gravel is placed in the annulus.

In the packing in horizontal wells of gravel transport is difficult because the severity does not facilitate the process, as opposed to vertical wells. The efficiency of packing and sequence of deposition decreases with increasing the angle of inclination of the wells, when performed with gravel packing wells that have angles less than 45 °, the packaging sequence occurs from the bottom up, such as seen in Figure 2. If the inclination of the well exceeds approximately 60 °, the sequence becomes more random deposition (Figure 3), gravel is in a transitional position between the bottom of the range falling or staying on top of it on the side bottom of the hole, this behavior is because 62 ° is the complement of the angle of repose of the gravel, which is approximately 28 ° (Fig. 4). 3.4.

For this reason the work of gravel packing in horizontal wells should be designed with pumping rates high enough to ensure the transport of gravel through the use of low-density brine fluids slightly gelled, while maintaining control in loss of fluids to prevent formation of bridges in the ring open pit grill.

The basic method for gravel packing process in horizontal wells is governed by two stages. In the first, the slurry (fluid transport and gravel) is pumped through the pipe to reach a larger section flow area below the packer, which slows the flow and the gravel begins to be deposited in the bottom of the hole forming dunes that increase in height decreasing the area available for flow and increasing the speed of the grout, it quickly generates an equilibrium in which the velocity at the top of the dune is enough to erode the top of it and prevent premature clogging by the uncontrolled growth of the dune. At this point, the dune begins to spread towards the bottom of the hole leading to what has been called the alpha wave. Alpha wave propagation continues until the end of the grid or the end of the pipe machine (whichever comes first) where the carrying fluid enters the grid and is circulated out of the well, starting the second stage of the process.

In this second phase called beta waves, gravel packing fill the remaining annular area and deposited on the alpha wave. Beta wave propagates from the end of the range upward. As the gravel fills the outer annular grid, carrying fluid is directed to a restricted area in the annular grid – washer tube to be circulated out of the well. As the beta wave continues to move the distance traveled by the fluid in the annular grid – wash tube gradually increases, causing a sustained increase in pressure pumping surface. When the upper section of the grid is covered with gravel occurs a violent increase in pressure pumping, indicating that the displacement of the gravel has been completed, finishing the packing process.

Figure 5 shows the sequence of deposition of gravel in a pit with 80 ° tilt.

1. Drill hole production drilling fluid designed according to reservoir conditions.
2. Short trips and circulate drilling fluid until clean returns.
3. Displace the drilling fluid and clean fluid that meets the requirements hydrostatic density equal to the mud used for drilling horizontal production section, up to 200 feet above the intermediate casing shoe
4. Download assembly sand control equipment.
5. Washer pipe down into the openings of sand control equipment and embedded in the O-ring seal placed in the last sub grid.
6. Finish packing equipment down to 5 feet above the final depth of the horizontal section of the pit producer.
7. Proceed to establish the hydraulic packer.
8. Move clean mud in the hole left by the fluid used in the packaging, compatible with the formation and drilling fluid used.
9. Establish and test shutter release tool of settlement and put in a position of movement.
10. Perform flow test to verify condition of the well, to determine the pumping rate of gravel and return fluid observed to ensure at least 70% of movement for the package.
11. Continue the process of packing, gravel pumping a predetermined rate to create the alpha wave to complete this phase begins beta wave reaching the final pressure and packing.
12. Reverse returns the system to get clean.
13. Try packing and pipe work out of the hole.
14. Complete well.

* The inadequate removal of the cake before or during the packaging process negatively affects the well productivity.
* The packed horizontal wells generally show greater achievement than the non-packaged foods, both for its increased production as the lowest decline in the period under review. 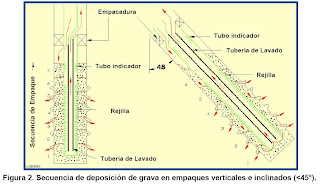 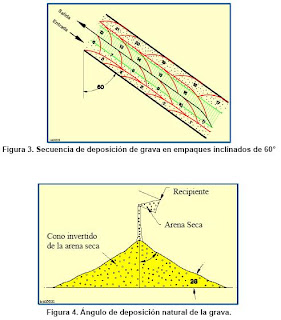 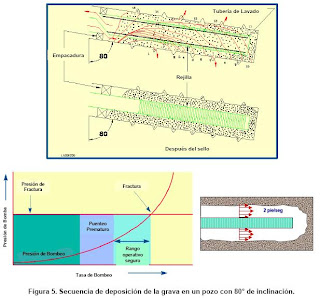