Are called Liquid Petroleum Gas (LPG) commercial mixtures of hydrocarbons with butane and propane are dominant.

In its natural state is gaseous in closed containers at room temperature a large part of them are in liquid phase occupying a volume 250 times less than they would occupy in gaseous state.

The once extracted as LPG gas refinery or related natural gas facilities, are compressed until they become liquid and held in that state in large storage normally adjacent to the refinery and port facilities, called terminals.

From the terminals, LPG is transported by boat, both by rail tankers by road or pipeline to the filling plants for commercial distribution in bottles (known in some countries such as bottles – Venezuela) or bulk deposits.

The high calorific value of the LPGs in comparison with other commercial gases, has the advantage that to obtain the same amount of total energy, will require smaller diameters of the pipes used for gas distribution in the gas phase, although pressures can not exceed a certain value because of condensation in the pipes.

Its characteristics of high purity and homogeneity of its components make it easy to adjust the air necessary for combustion of these products to be stoichiometric.

They are also essentially free of sulfur and other substances such as metals.

Based on your marketing can be classified as:

* LPG, which is used almost exclusively for domestic fuel and heating.
* LPG stored in fixed deposit, which is used mainly in domestic, residential, commercial, agriculture, and in certain industries.
* Automotive LPG for use as fuel. 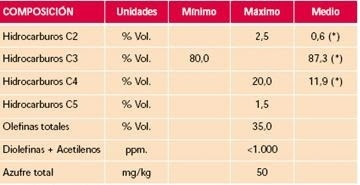