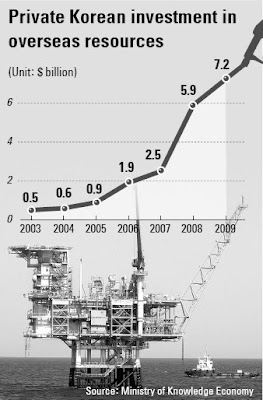 The government and the state-run Korea National Oil Corp. (la estatal Coreana) are expected to buy one or two overseas petroleum companies within this year (2009-2010) in a move to secure natural resources.

Kim Young-hak, the vice minister for energy and trade at the Ministry of Knowledge Economy, said yesterday that the government is currently engaged in exclusive talks with five overseas oil companies, with up to two to be chosen for purchase by the Korean government and the corporation this year.

The state-run oil company in June was on the verge of purchasing the Swedish oil company Addax Petroleum, which boasts daily production of 100,000 barrels and oil reserves of 9 billion barrels, when the Chinese state-run oil refiner Sinopec offered to buy the firm for $8.9 billion – $300 million more than Korea’s bid.

Private investment and the government budget for overseas resources have risen sharply, especially in the two years since the business-oriented Lee Myung-bak became president.

Lee’s resource budgets for 2008 and 2009 were 1.6 trillion won ($1.2 billion) and 983.3 billion won, respectively, or 2.6 trillion won total. That figure exceeds the cash set aside for natural resources development in all five years of the previous administration combined. Spending in the area is slated to increase to a total of 3.4 trillion won from 2010 to 2012.

Korea’s private investment in overseas resource development over the last two years totaled $1.3 trillion, also higher than the $784 billion made from 2003 to 2007.

Vice Minister Kim also said that the government is planning to expand NH-Oil, the gas station network run by Nonghyup, to increase competition on the local petroleum market and drive down prices.

There are now 411 NH-Oil gas stations across Korea, and the government now plans to allow 900 private gas stations, or about 10 percent of the total number, to use the NH-Oil brand. Those stations will be able to buy oil from Korean and foreign refiners at a lower price.