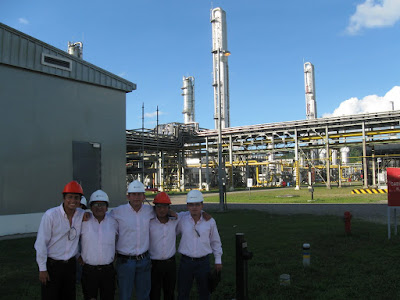 Terms you should know about Natural Gas Industry!
Annual contract quantity (ACQ). Yearly total delivery quantity as specified in a gas sale agreement or an LNG sale and purchase agreement.

Associated gas. Natural gas that occurs with crude oil reservoirs, either as free gas or dissolved in solution. It is usually produced with crude oil.

Barrel of oil equivalent (boe). A unit used to equate natural gas and other nonliquid fuels to crude oil based on the amount of heat released when combusted. In general, 1 boe ? 5.8 Mcf to 6.0 Mcf natural gas, depending on the heat content and composition of the gas.

Base load. The minimum amount of steady electric power generated over a given period of time, operated to serve around-the-clock demand.

Bcfd. An abbreviation for billion cubic feet per day. Unit used to measure the daily volume of gas produced, stored, transported, or consumed.

Bcmd. An abbreviation for billion cubic meters per day. Unit used to measure the daily volume of gas produced, stored, transported, or consumed.

British thermal unit (Btu). An energy unit equivalent to the amount of energy needed to raise the temperature of 1 pound of water 1°F from 58.5°F to 59.5°F under standard pressure of 30 in. of mercury. Commonly used for measuring gas and other energy sales quantities.

Cascade process. A natural gas liquefaction process that uses a series of refrigerants to obtain successively lower temperatures. This process is mainly promoted by ConocoPhillips and Bechtel.

Combined cycle. An electric generating technology in which conventional gas combustion turbines are combined with heat recovery steam-powered generation units, increasing the overall efficiency of the generating facility. Electricity is produced from both the feed gas as well as from otherwise lost waste heat exiting gas turbines. In a conventional steam power generating facility, electricity is generated only from the feed gas.

Condensates. Light hydrocarbon compounds that condense into liquid at surface temperatures and pressures. They are generally produced with natural gas.

Cost-insurance-freight (CIF). LNG sales contract in which the buyer takes ownership of the LNG cargo at the loading port or during the ship’s voyage to the receiving facility. The LNG seller is responsible for the delivery of the cargo, and the contracted sales price includes transportation and insurance costs.

Cubic feet (cf). Common unit of measurement of gas volume equivalent to the amount of gas required to fill a volume of 1 cubic foot under given temperature and pressure conditions.

Delivered ex-ship (DES). LNG sales contract in which the buyer takes ownership of the LNG cargo at the receiving port. The LNG seller is responsible for the delivery of the cargo, and the contracted sales price includes transportation and insurance costs.

Fractionation. The step process that separates NGL hydrocarbons into distinct components, such as ethane, propane, and butane.

Free-on-board (FOB). LNG sales contract in which the buyer takes ownership of LNG as it is loaded on ships at the LNG export facility. The buyer is responsible for LNG delivery, either on its own ships or ships chartered by the buyer. The contracted sales price does not include transportation costs or insurance.

Gas cap. Natural gas present in upper portions of a reservoir, typically above the oil and water layers.

Gas initially in place (GIIP). The total gas volume present in a reservoir or field. Reserve estimates include the proportion of GIIP volumes that can actually be produced.

Gas sales agreement (GSA). The contract between a seller and buyer for the sale and purchase of a specified quantity of natural gas for a specified price and term.

Heads of agreement (HOA). A preliminary agreement covering the main terms of a future agreement yet to be finalized. It may or may not be binding and is similar to a term sheet.

Line pack. Gas storage within a pipeline or pipeline network created by increasing the pressure and volume above normal operating levels. This is used to handle short-term demand swings. Sometimes refers to the minimum inventory needed to fill the pipeline to working pressure.

Liquefied natural gas (LNG). Natural gas, mainly methane, that has been cooled to -161.5°C or -259°F and condensed into a transportable colorless and odorless liquid.

Liquefied petroleum gas (LPG). Gas mainly composed of propane and butane, which has been liquefied at low temperatures and moderate pressures. LPGs are extracted from produced natural gas streams or produced in a refinery.

MBtu. An abbreviation for thousand or 103 Btu.

Methane (C1H4). The lightest and most abundant of the hydrocarbon gases, it is the principal component of natural gas and LNG.

Mmixed refrigerant process. LNG liquefaction process in which methane is first precooled by propane and subsequently liquefied by a mixed-component refrigerant produced from a combination of nitrogen, propane, ethane, and methane.

MTA. An abbreviation for million tons per annum (year).

Nonassociated gas. Natural gas produced from fields that do not produce oil.

Peak load. Maximum electricity or gas demand during a given 24-hour period or otherwise specified period of time.

Petroleum. General term for all naturally occurring hydrocarbon compounds found in rock, including both liquid and gaseous compounds.

Pig. A device with blades, brushes, or measurement instruments inserted into a pipeline for cleaning and inspection purposes.

PJ. An abbreviation for petajoules.

Possible reserves. Unproved hydrocarbon reserves that are estimated to have at least a 10% chance of being technically and economically producible. These reserves are included in proved + probable + possible (3P) calculations.

Power purchase agreement (PPA). A contract for the purchase of electricity, normally between the owner of the power plant and the buyer of the electricity.

Probable reserves. Unproved hydrocarbon reserves that are estimated to have at least a 50% chance of being technically and economically producible. These reserves are included in proved + probable (2P) calculations.

Project financing. A common method of financing infrastructure or investments in which lenders rely on cash flows generated by the project to repay the debt and on the project assets as collateral for the debt.

Proved reserves (P reserves). Proved hydrocarbon reserves that can be estimated with reasonable certainty and having at least a 90% chance of being technically and economically producible under current conditions. These can be further divided into proved developed reserves and proved undeveloped reserves depending on infrastructure available.

Reserves. Volumes of hydrocarbons that have a chance of being economically and technically producible.

Reservoir. A subsurface rock or formation having sufficient porosity and permeability to store and transmit fluids such as gas, oil, and water. Reservoirs are typically composed of sedimentary rocks with an overlying or adjoining impermeable seal or cap rock.

Shrinkage. Volume of natural gas that is extracted into liquid products, water, and impurities during gas processing.

Take-or-pay (TOP). Minimum contractual volume obliged to be purchased by the buyer, regardless of whether the buyer actually takes delivery.

Therm. Unit of energy equal to 100,000 Btu, commonly used in the United Kingdom for gas pricing; 1 therm is approximately equal to 100 ft3 of gas.