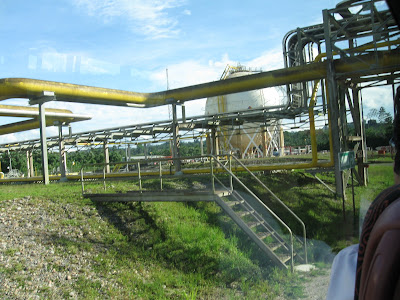 The entrapment of natural gas molecules in ice at very low temperatures forms an ice-like solid which is a metastable complex called a gas hydrate. Gas hydrates are clathrates. A clathrate is a chemical complex that is formed when one type of molecule completely encloses another type of molecule in a lattice. In the case of gas hydrates, hydrogen-bonded water molecules form a cage-like structure in which mobile molecules of gas are absorbed or bound.
The presence of gas hydrates can complicate field operations. For example, the existence of hydrates on the ocean floor can affect drilling operations in deep water. The simultaneous flow of natural gas and water in tubing and pipelines can result in the formation of gas hydrates that can impede or completely block the flow of fluids through pipeline networks. Heating the gas or treating the gas-water system with chemical inhibitors can prevent the formation of hydrates, but increases operating costs.

Gas hydrates can be found throughout the world [Selley, 1998;Makogon, et al., 1997]. They exist on land in sub-Arctic sediments and on seabeds where the water is near freezing at depths of at least 600 to 1500 feet. For instance, favorable conditions for gas hydrate formation exist at sea floor temperatures as low as 39°F in the Gulf of Mexico and as low as 30°F in some sections of the North Sea. According to Makogon, et al. [1997], over 700 trillion m3 in explored reserves of methane in the hydrate state exist. Difficulties in cost effective production have hampered development of the resource.