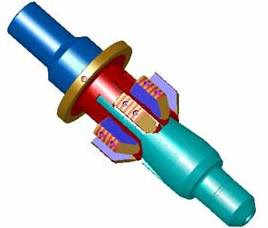 Classification tools based on the type of fishing

FUNCTION: HANDLE OR CLIP Type: External Hold internal Tarraja (Die Collar)
Fishing is a simple tool that grips the outside of the piece tubular donut-shaped styling. The A Toolkit screwed on the right and left rotating loose why it is rarely used because it does not loosen easily and is not practical.

PLUG (Overshoat)
It is a tool that grips the outside by means of wedges or claws that allow running on the tapered surface of the connector plug. Modern plug is removable, you can move around the fish, hold the tension, torsion and shock necessary to loosen the fish. That’s why the plug is the tool most commonly used fishing in the rescue work.

Type: Grab the inside tapered male (taper tap)
It is a tool designed to grip the inside of the fish tubular pipe enters the styling (plotting) thread in their wake. As the collar of the dice, do not release the tapered male fish. Although still used in special tasks, the tapered male has been replaced almost entirely by several types of harpoons.

FEATURE: WASHING MACHINES
Often, the fish catch is not enough to remove and must resort to other means to remove it. The most common and most effective way is to apply a wash with larger diameter pipe.

Type: Clean out Tube washing (wash pipe)
Rotation is used for the fish to detach from the wall of the hole and leave the solids that have stuck. The duty washing tube external diameter of the well. The diameter should be slightly larger to fit over the fish. Generally the backwash line is made by coating type N-80 with thick walls and the proper size to get over the fish and is equipped with connections that can be well soldadadas or thread.

Rotary Shoe (rotary shoe)
These shoes are constructed of high quality steel cutting surfaces consist of tungsten carbide bits of different sizes. Place the lower end of the string machine. With it you can «punch» or clean the annulus between the casing and fish, thus making a breakthrough. The design of the shoe depends on the material Rotary fish sticks or metal drilling.

As shoes are generally used for cutting gear Rotary formations while the flat bottom used to cut metals such as gaskets, nail walls, etc.

Type: Combined Function Washer – loosen Get off at the upper end of washing. She grabs the top of the fish in the jack by screwing it. The portion that has been washed and separated from the rest of the fish through a loose shot strings. Washing, pulled loose and repeat until you have recovered the whole fish.

FEATURE: O jackhammer force multiplier
Hydromechanical
Consist of 2 components, a hydraulic hammer is usually placed in the top of the hammer and mechanical component which is often located n the bottom of the structure. Both components can be used separately and individually as a single unit. Usually connected above the neutral point of the bottom assembly. A special feature is that it has a device called an insurer or mechanical lock, this device eliminates the need to open the hammer before running it on a well and also eliminates the possibility that the hammer to fire while making a trip to run in the well either lowering or removing the string.

Mechanical hammer (jar)
The working principle is supported by the action of a spring mechanism which is energized by action of tension or compression and which then LBER the energy needed to produce the shock with which they seek to achieve the release of fish.

Subgolpeador (Bumpersub)
This is the simplest of artifacts in fish force multipliers. It is a telescopic joint that gives a blow each time the line reaches the end of tour telescope also called Scissor .. Because it is simple and gets stronger as part of any string in fishing.

FEATURE: UNLOCK TOOLS Type: Split left Safety Board (Safety Joint)
Is a board that is threaded and unscrews left by clockwise rotation. Be placed on a plug or similar tool or drill collars tubes when there is a chance of jamming the string.

External Cutters (external cutter)
The cutters on the outside are connected to the lower end of the washing tube. Retained in the tube section of fish washed and cut and is rescued.

Anti-seize explosive back-off
Also called explosive cord consists of an explosive charge disposed in the cord that can be shot down to cable in the fish, so that the work load the fish are to be aguntar twist. The explosion opens the connection female fish.

FEATURE: PRINTERS O INDICATOR Type: Fish Stamp Stop Lead block printing (Printer block)
A block print gives visual evidence to determine the spectrum of the top of the fish. The printing blocks are usually one-piece assembly consisting of a steel body within which have shaped a block of lead. The simplest indicator.

Cutters chemicals (chemical cutter)
Used when it is not possible to perform an extraction of fish with explosive cord because the pipe is stuck spinning even when torque is applied to unscrew. The cutter is lowered to the cable to the depth at which the wing is going to make the cut which is usually one or two joints above the sticking point and the cutter is activated by an electrical impulse delivered from the surface. They got cable.

Casing Scraper
Is used to remove crusts of mud or concrete, embedded bullets, guns edges created by drilling, rust deposits of paraffin and similar substances from inside the walls of the casing.