Salt water systems and brackish water are used in drilling operations offshore and coastal due to inexhaustible supplies of such water in the drilling site. Other advantages of using salt or brackish water in drilling fluids include the fact that clays are hydrated perforated less than when using fresh water.

To understand the drilling fluid salt water is necessary to understand the salt water and how the components react mud on it. The pH of seawater is buffered against change by a solubility equilibrium with atmospheric CO2 and sedimentary calcium carbonate.

This means that when increasing the pH of seawater by the addition of alkaline materials, atmospheric CO2 will be absorbed into the water to buffer the pH. Since the accumulation of these carbonates is detrimental to the properties of drilling fluid, the concentration mantieneuna excess of lime (which is not in solution) in the system. Acumulaciónde prevents lime carbonate and dampens the pH within the desired range. Thus, a slurry of salt water should be used as a «system low lime content.»

The saturated salt water systems are designed to prevent the widening of the well during drilling of sections of salt. This broadening is that the salt contained in the well is dissolved in the aqueous phase «no salt saturated» the drilling fluid. The saturation is achieved by adding salt (sodium chloride) in the mud system to reach the saturation point.

Saturation is approximately 190,000 mg / l of chlorides, depending on temperature.

When saturated salt water is added to the drilling fluid to maintain an acceptable concentration of drilled solids, products must be added to maintain the desired concentration of additives. Therefore, measure or calculate the volume of dilution water, so this volume can be used as a basis for product additions. The basis of the materials must be added the salt water. The amount of dilution required depends on the size of the pot, the rate of penetration, type of training, solids control equipment and the optimal concentration of drilled solids in the drilling fluid.

Frequent checks of chloride should be made to monitor the salt content for saturation. It will be necessary to take measures to ensure that all the dilution water is saturated before being added to the active system. In areas where humidity is high, the salt absorbs water, becomes lumpy and almost impossible to mix through the mud mixing hopper at a rate sufficient to maintain the drilling fluid saturated. If you mix the salt directly into the mud, about half the salt will be covered by mud and sediment at the bottom of the tanks. 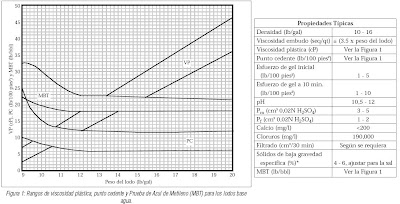