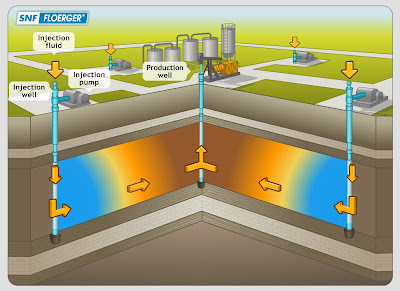 Microscopic displacement efficiency is affected by the following factors:

When a drop of fluid is immersed in another immiscible fluid, and these rest on a solid surface, the surface area of the drop will take a minimum value obeying the forces acting on the fluid-fluid interfaces and fluid-rock. The force per unit length acting on the interfaces mentioned are called interfacial tensions. Interfacial tension between two fluids is the amount of work required to create a new unit surface area at the interface. Interfacial tension can also be conceived as the extent of the immiscibility of two liquids. Typical values of surface tension of oil-brine are approximately 20 to 30 dyne / cm.

The strong tendency to prefer one over another is called fluid wettability. The wettability is a function of the chemical composition of both fluid and rock. Surfaces can be either wettable or water to oil, depending on the chemical composition of fluids. The degree to which the rock is wettable to water or oil is strongly affected by absorption of the constituents in the oil phase.

Another factor that affects the microscopic displacement efficiency is the fact that when two or more phases are present and flowing fluid, the saturation of one phase affects the permeability of the other, which leads to the concept of relative permeability.

Macroscopic displacement efficiency is affected by the following factors:

* Heterogeneity and anisotropy
* Mobility displacing phase compared with the mobility of the displaced fluid,
* Physical arrangement of production and injection wells, and
* Type of rock matrix in which are oil and gas.

The heterogeneity and anisotropy of a formation has a significant effect on displacement. The movement of fluids through the reservoir will not be uniform if there are large variations in properties such as porosity, permeability and clay cement. Many productive zones vary in permeability, both vertically and horizontally. Zones or layers of varying permeability often show lateral continuity through a reservoir or only a portion. When such a permeability stratification exists, the displacing fluid sweeps faster more permeable areas, so that oil from more permeable areas will be produced in a much longer period to high oil-water relationships.