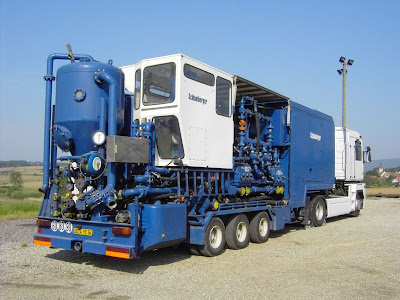 This will be a short post to talk strictly about the differences between different types of work performed acidification to the formation of which students are often present doubts.

As we know acidification is mainly used to dissolve some of the rock and undesirable materials are deposited within the formation and that apart from reducing PI (production index) may affect the plugging of the pierced, the flow in the tubing , rods, flow lines and other depending on the type of survey.

Well the goal is broad above, but how they differ:

A. ACID WASHING
In this operation the acid is placed against the area to be looking for the reaction without external pressure, hydrostatic pressure only. Acid thus paid more than about 1 foot into the training.

B. MATRIX ACIDIFICATION
Unlike earlier here does apply pressure but not to the point of fracturing of the rock, looking for a radial expansion of the acid.

C. ACID FRACTURING
As its name indicates, here it is achieved fracturing caused by a pressure above the point of fracture of the rock, which not only channel conductivity is achieved but also a large area which drain to prevent rapid plugging must be accompanied by a support agent such as sand fracturing.