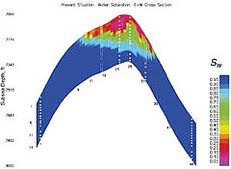 Translation of Chapter 25 of the Book of Charles E. Webber – Manual of Petroleum Exploration.
The solution gas reserves depend on the initial oil volume in the reservoir and the extent to which oil is saturated with gas. Consequently, estimates of gas reserves in solution must be followed or made jointly with estimates of oil reserves.Recoverable gas in solution = Stocks barrels recoverable * Gs * Rg (25-8)

This factor should be determined in the laboratory in a PVT cell in a sample of oil or a synthetic sample recombined. The oil sample, pure or combined, is released into the cell. A valve is opened and oil leaks, releasing the gas as it allows the cell. The oil and gas volumes are measured separately at standard conditions, and reason in terms of cubic feet per barrel becomes the factor Gs.

In the absence of samples for PVT cell research, the actual proportions of field gas / oil can be used as the factor Gs.

Rg This recovery factor is estimated using as a guide previously selected recovery factor of oil recovery in oil reserve estimates. Sometimes this factor (Rg) is indicated by R for crude, sometimes larger and sometimes less, depending mainly on the nature of the mechanism of production in the reservoir.

The gas thrust solution immediately begins to release gas while oil is extracted. This continues until the production cap is reached. Depleted reservoir oil still contains some remnants of solution gas and free gas filling the pore space originally occupied by oil. If the original pressure of the reservoir and the oil bubble point pressure was high, a large amount of gas was originally in solution. A lot of it was produced with oil, and the rest is dissolved in oil or occupied spaces, is proportionately smaller. In these reservoirs the gas-recovery factor is generally higher than for oil. A minor upward adjustment is in order.

Otherwise, if the bubble point pressure is low, little gas is present in solution with oil. Abandoned much of it may still be in the empty spaces left by oil. Gas recoveries therefore likely to be lower than for oil.

As a practical matter these settings on the gas recovery from the diagram chosen are difficult without a superior experience. For many are ignored.

The expansion push gas layer behaves differently, depending largely on the relative magnitude of volume of free gas above the oil in situ. The inner workings and redistribution of gas released as free gas are complicated. The browser or engineering geologist seldom have enough information (which can only come from the production history) to predict them. So I usually pick the same recovery factor for gas (Rg) as it does for oil (R).

The reservoirs of hydraulic thrust, if not produce fast, have low pressure drop. If the pressure falls below the oil bubble point pressure, virtually no gas is released into the reservoir.

When the oil is exhausted, water will continue to pass the limits, bypassing the residual oil and gas to force the production of the fields. In these conditions, the ultimate recovery of gas is higher than for oil. An upward adjustment is in order.