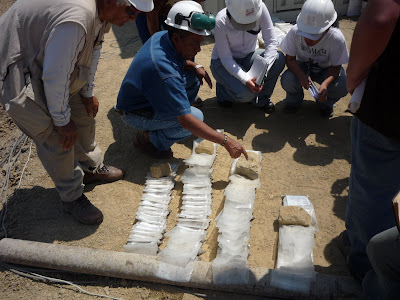 Brines are solutions of salts with water. These fluids cause less damage to the foam-producing formations.

Its use in operations and workover completion is for the control and cleaning them.

SODIUM BRINE
Is a solution consisting of fresh water and salt (sodium chloride) with a density of 1.19 g/cm3.

* Do not damage the formation and fluids that are free of solids.
* The cost is very affordable.

* Limitations in the range of density.
* Null pulling power not contain suspended solids.
* They are corrosive.
* They are irritating.
* When you exceed the limit of saturation is precipitated salt.

a) are always used as control fluids.
b) easily allow the introduction of pneumatic pumping rigs that these fluids have no suspended solids.

CALCIUM BRINE
Is a solution of calcium chloride in water. Maximum density of 1.39 g/cm3.

* Do not damage the formation.
* Allows making gear conversion operations in oil wells.

* They are corrosive.
* They are irritating.
* When you exceed the limit of saturation, the salt is precipitated.

Application of calcium brine
Control and cleaning of wells especially when mixed with calcium clay (attapulgite), for viscosity.

BRINE WITH POLYMERS AND Weighting
Solutions are salts that are added to polymers to provide viscosity and gelatin, as well as, Weighting to increase the value of its density.

Advantages of polymer-brine and Weighting

* By adding polymers becomes a cleaning fluid with great pulling power.
* The densified, can increase its density to 1.70 g/cm3.
* Contain suspended solids that do not damage the formation, as they are readily soluble in acids.

Disadvantages of the brine with polymers and Weighting

* The costs increase considerably by adding polymers.
* They are irritating (especially calcium brine).
* When the temperature is from 1000C, degrade causing problems of settlement.
* Cause problems for foam generation.
* They are corrosive.

Brine applications of polymers and Weighting

* They are used in the control and cleaning of wells.

IMPORTANCE OF TEMPERATURE ON THE USE OF THE BRINE

* When using brines is important to note that these are affected by temperature.
* The increase in temperature decreases the density of the brines. Remember that the temperature of the well vary with depth. For the brine, the average reduction in density is 0.03 g/cm3. This value will be affected of course by increasing the temperature.

* The producer of a life well determine the type of fluid and additive to mix to make it inside. Fluid called empacantes (packaging) that will remain confined there during this period between the walls of TR and T.P. (Annular space). Should receive special treatment, which are not corrosive to avoid shortening the life of rubber components (elastomers) production rig.