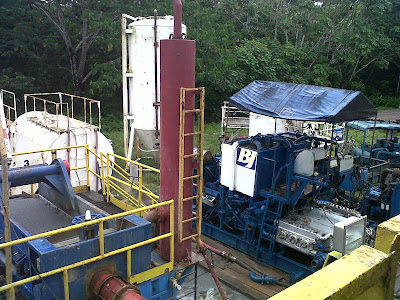 Acidize, acidizing or acid job a method used to increase production in a well that is producing from a carbonate formation by using acid to dissolve the reservoir rock. The most common acids used are 15% HCl (regular acid), HCl/HF (mud add), HF, acetic, and formic. An acid inhibitor or reaction-rate retarder can be used to delay the reaction time of a strong acid to protect equipment in the well and allow the acid to penetrate the formation.
The acid is usually pumped down the well and held under pressure for a period of time The spent acid is then pumped back out during cleanout and the well is swabbed. Acid volumes commonly range from 1,000 to 100,000 gals of 10-20% acid. Matrix or interstitial acidizing is used to etch a formation, usually a carbonate to increase permeability in a well. Matrix acidizing is done with pressures less than formation fracture pressure, and the acid flows through the natural permeability routes in the formation.

A wellbore cleanup treatment uses acid to remove cement residue, drilling mud, scale and perforation debris from a well. There is little or no circulation of acid during a wellbore cleanup.

An acidfrac is a hydraulic fracture job that uses an acidic frac fluid with or without propellents. Acid additives can he combined with the acid to reduce friction, control clay, stabilize clays and break and break emulsions.