VSP Vertical Seismic Profile shows a geophone measurements at different depths in the well which are sent to receptors on the surface. When the source is at a considerable horizontal distance of the well head, the result is an offset VSP.

For Azimuth VSP offsets exist in different directions. In a walkaway VSP source geophone moves while stationary. In a reverse VSP the source is in the hole and surface geophones.

The VSP vertical seismic profile can be made both for directional and horizontal wells. A VSP walkabove is performed with the probe in a deviated hole and placed vertically above the source. The result is a VSP corridor We often presented in a stack. 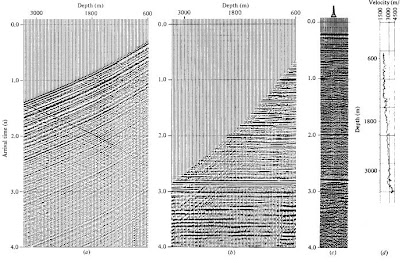 a) Each stroke is recorded at the depth of the hole using an air-gun source at the surface. b) Some lines have been staggered by one-way lines and the reflections are aligned horizontally. C) A portion of a recorded reflection through the well site. d) Registration sonic well.

The first step is usually a correction of the slant-path propagation time because that is not vertical raypath. The depth z of the probe divided by the time the first break tv gives the average velocity V (z) and Z exchange between change of TV gives the velocity range Vi. The energy coming rapidly after TV is used to perform a corridor stack also called Outside corridor stack. If Tv (z) is deducted for every stroke, arrivals are acentudas. If the source generates S-waves and a 3-component geophone is used, the wave arrival can be seen and if their travel times are added to each stroke, the reflection of S-waves can be seen clearly.