It is generally believed that the liquids are both lifted in the gas flow as individual particles and transported as a liquid film along the tubing wall by the shear stress at the interface between the gas and the liquid before the onset of severe liquid loading. These mechanisms were first investigated by Turner et al., who evaluated two correlations. Turner discovered that liquid loading could best be predicted by a droplet model that showed when droplets move up (gas fl ow above critical velocity) or down (gas fl ow below critical velocity).
Turner et al. developed a simple correlation to predict the so-called critical velocity in near vertical gas wells assuming the droplet model. In this model, the droplet weight acts downward and the drag force from the gas acts upward. When the drag is equal to the weight, the gas velocity is at “critical”. Below the critical velocity, the droplet falls and liquids accumulate in the wellbore.

Turner’s correlation was tested against a large number of real well data having surface flowing pressures mostly higher than 1000 psi (There’s ecuations a lower pressure called Coleman’s equations). Examination of Turner’s data, however, indicates that the range of applicability for his correlation might be for surface pressures as low as 5 to 800 psi.

Two variations of the correlation were developed, one for the transport of water and the other for condensate. To better match the collection of measured field data, Turner adjusted the theoretical equations for required velocity upward by 20 percent. From Turner’s original paper, after the 20 percent empirical adjustment, the critical velocity for condensate and water were presented as: 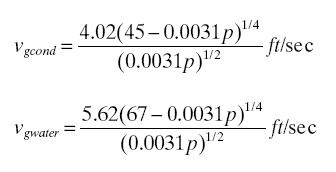 These theoretical equations comes (in general) of critical velocity Vt to lift a liquid is:

where s = surface tension, dynes/cm, r = density, lbm/ft3.
These equations predict the minimum critical velocity required to transport liquids in a vertical wellbore. They are used most frequently at the wellhead with P being the flowing wellhead pressure. When both water and condensate are produced by the well, Turner recommends using the correlation developed for water because water is heavier and requires a higher critical velocity.