In 1983 began the development of the DDM (Derrick Drilling Machine), to replace the conventional rotating drill string with Stem and Rotary Table. The first model was launched in 1984, this was the DDM 650 AD, a DC Top Drive to 650 tonnes in weight and designed for offshore installations.

The demand for increased torque capacity resulted in the development of 2 versions of Top Drive, the DDM 500/650 EL and HY DDM650 high torque, both released in 1989.

In 1993, the market enters a Top Drive motor of 2,100 hp and 8,800 Nm output torque with this team drilled a directional well to 12,000 m. It is obvious that in recent decades with Top Drive Drilling has become the predominant method of drilling offshore wells. At present we have experienced critical operations in onshore wells are drilled using Top Drive systems.

Drilling a well is the only way to know if there are deposits of hydrocarbons at the site where the geology suggests that could locate.

The depth of a well varies, depending on the region and the depth at which training is selected with the potential to contain commercial hydrocarbons. There are wells ranging from 1,500 meters and others exceeding 10,000 feet deep.

Besides considering the above and factors ranging from the costs of rental of drilling tools, the time it takes to drill each well, safety factors and others were somehow forced to search for new technologies carry out the drilling.

While indicating that the Top Drive system is costly, it is also necessary to indicate the multiple benefits that this its adoption within the drilling.

Both the advantages of this system as technical, operational and security are to be exhibited in this document.

2. DEFINITION OF TOP DRIVE SYSTEM
Top Drive System can be defined as a tool in general, but to be more precise we can define it as an electric or hydraulic motor which is suspended on any mast of a rig. This tool is responsible for rotating the drill string and drill bit.

The top drive system replaces the functions of a rotary table, allowing the drill string to rotate from the top, using a swivel own, instead of the swivel, stem and conventional rotary table. In addition the system is operated by remote control from the drillers console.

* Easily installed on any mast or derrick, with lasmínimas changes and often in a single day.
* Replaces Rotary Officers and Rod (Kelly). The Top Drive rotates the drill string directly.
* «Improving safety in the handling of the pipe.» All operations are performed remotely from the driller’s cabin, reducing manual tasks and risks that traditionally accompany the task.
* Ability to tighten the connection by giving them a proper torque.
* Pierce 90-foot sections (1 shot), reducing connection time by eliminating two thirds of them.
* Perform core taken at intervals of 90 feet without having to make connections.
* In directional drilling, maintaining the orientation at intervals of 90 feet, reducing the monitoring time (survey time) improved directional control.
* Suitable for all drilling operations, directional, horizontal, underbalanced, air or gas drilling, well control, fishing, etc.
* Reduce the risk of entrapment of the string, for their ability to rotate and move at the same time.
* Improved response well control operations. During drilling underbalanced hydrostatic pressure below the formation pressure, the Top Drive increases security of the well to reduce wear on the blowout preventer and to allow this and the preventer head Rotary packed around a round tube instead of about kelly, quad, or hex.
* There is drilling on land (Onshore) or offshore (offshore)

UNITS 4.1 Components.
In the first place we have the primary components, so called because they are part of the tool that is installed on the mast of the rig.

These components due to globalization and knowledge within the oil industry is in English, with some of them indicated their possible translation into Spanish. 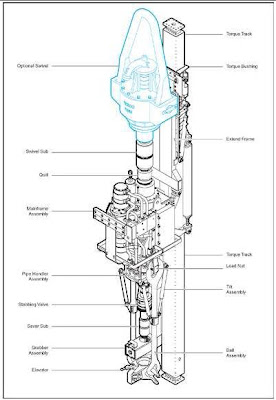 4.2 Components SIDE
We refer to these as well, because they are mostly supporting elements, yet it is clear that without them the whole system would not work.

The main side is made up of components: Panel Drilling (Drillers Panel), Power Module (Power Module), Service Loop (Loop Service) Hydraulic Lifts (Hydraulic Elevators), and mud and saving Valve Actuator (Mud Saver Valve and actuator), which are described below:

Panel Drilling (Drillers Panel)
Drilling Panel is a stainless steel top fitted with all controls, or controls, LEDs, measuring instruments and connectors required to operate the Top Drive from the position of the drill.

All controls are 24 volt (DC). There are two main cables, made in turn by another 37 cables, each with a specific function. One connects the power module (power module) to the panel holes and another connects the Top Drive also panel perforations.

Send additional pumps hydraulic flow through an auxiliary to the Top Drive, allowing the operation of several automatic functions as well as the hydraulic oil flow through a filtration and cooling system before returning to the reservoir.

The module can also contain an electrical panel that accepts an input of 480 or 600 volt AC generator rig and converts it to another voltage in this way can operate electrical components Top Drive System.

Service Loop (Loop Service).
The service loop is a set of lines that allow the communication of the elements that comprise the Top Drive System.

The service loop sends and receives electrical communication from the power module and panel drilling and hydraulic flow to and from the Top Drive.

Is of high importance given when installing these lines, but must be careful not to damage the lifting or blocked from being in the middle of the tower.

The service loop should not be in contact with any part of the tower.

This gives the ability to open and close the elevators in very high positions of BHA (Bottom Hole Assembly) and the same as reducing operator exposure to additional risks associated with manual operations of the elevators. 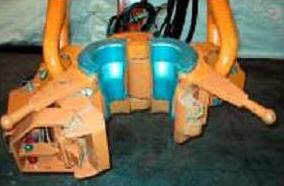 Fig. 3. Elevadores Hidraúlicos
Saving valve actuator mud (Mud Saver Valve and Actuator)
These are elements that act as part of the security system of the Top Drive.

The mud-saving valve with remote actuator act as a valve to prevent emergency blowout similar to a BOP. The actuator is designed to open or close the valve mud saving at any point in the tower.

It is critical that the drive will never work while the pen (quill) is rotating, it can damage internal components and lead to failure of the actuator.

Extension.
This operation allows the Top Drive located above the trap (mouse hole), where the pipes will stay to be lowered to the drilling.

Tilting of the Links (Link Tilt).
Commonly known as «Fasteners», they can be tilted forward about 35 degrees and back about 55 degrees, thereby moving the elevator and allowing various tasks associated with running pipes safely and reducing the time in operations.

4) During the lift, the links (link tilt) and the elevator are secured to the pipe to give better support.

Key Operation Counterforce (Grabber).
The key Grabber Counterforce or acts as a clamp, which allows the time of makeup and breakout of pipelines, providing adequate torque.

Grabber normally need a pressure above 1000 psi, for in order to entrench proper operation. It should be noted that this pressure comes from the Power Module (Power Module). The operation performed by the Grabber usually takes a period of approximately 20 to 30 seconds.

DRILLING PROCESS 5.2.
Keep in mind that with this new system, you must adhere to the same operational practices and safety procedures used in conventional rotary drilling.

Before any move to the Top Drive, it should be noted that this takes up much more space on the floor of the tower of what Kelly does, so the work must be kept free from obstacles that may interfere with the movement of the tool and the same staff.

The Basic Procedure of Top Drive Drilling is:

2) the connection is made through the pen (quill rotation) with the pipe lodged in the trap (mouse hole). The connection is carried out within the junction box (thread box), where the backup wrench (grabber) and the quill pen will apply the necessary torque.

3) The Top Drive rises along the tower, next to the line connected,

4) During the lift, the links (link tilt) and the elevator are secured to the pipe to give better support,

5) proceeds to make the connection, the key chains are used to hold the pipe is suspended in the rotary table, helping the same way to an effective connection. The key counterforce (grabber) and the pen (quill) is responsible for giving proper torque.

6) Having made the connection, proceed to remove the drilling wedges (slips) of the drilling table, then from the driller’s cabin, activated sludge pumps and immediately activates the drill.

At the same time is assigned to the pen (quill) the specified RPM (revolutions per minute), either increasing or reducing the hydraulic flow from the pumps.

It should be noted that it would be too critical that the actuator does not run while the pen (quill) this rotating, as this will damage the internal components and lead to a failure of the actuator. Because no drilling fluid is not effective functioning of the tools.

7) It is now the drilling and equipment and must have control data from the Panel of the Punch and other measuring instruments. (Pressures and volumes).

5.3 Role MANUALS.
Basically the manual functions (operations where directamentelos operators involved), include those involving conventional drilling; clear that with this system there are benefits that turn into advantages. These operations are:

* Cleaning of the pipes and the floor of the table.
* Use of string keys: Needed to adjust and unfasten the wellhead pipe.
* Start of Drilling wedges (Slip): Provide support the pipe in the rotary table and avoid slipping into the well when connecting or disconnecting the Top Drive.
* Control of measuring and drilling data from the Panel (Panel Driller): One of the main and important functions, which in charge of drilling along with coordination of all personnel will determine the success of drilling.