Petroleum Traps
Geologists have classified petroleum traps into two basic types: structural traps and stratigraphic traps. Structural traps are traps that are formed because of a deformation in the rock layer that contains the hydrocarbons. Two common examples of structural traps are fault traps and anticlines.An anticline is an upward fold in the layers of rock, much like an arch in a building. Petroleum migrates into the highest part of the fold, and its escape is prevented by an overlying bed of impermeable rock (A). 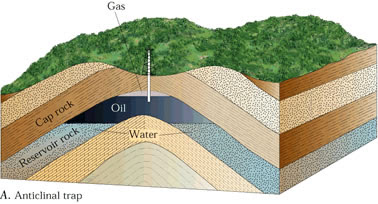 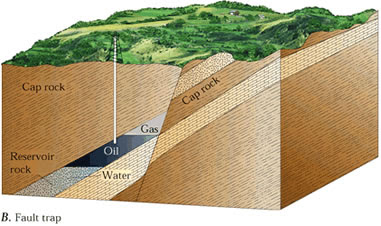 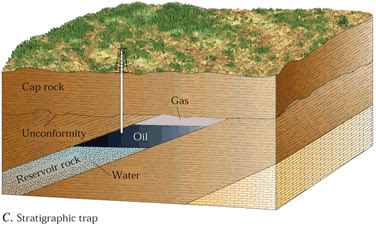 Or sometimes a petroleum-bearing formation pinches out; that is, the formation is gradually cut off by an overlying layer. Another stratigraphic trap occurs when a porous and permeable reservoir bed is surrounded by impermeable rock. Still another type occurs when there is a change in porosity and permeability in the reservoir itself. The upper reaches of the reservoir may be impermeable and nonporous, while the lower part is permeable and porous and contains hydrocarbons.