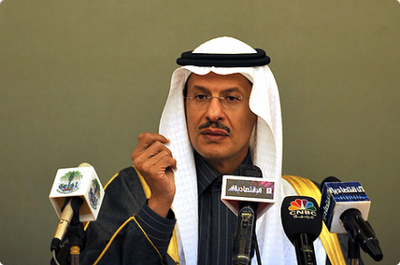 February 2011. Global markets have enough oil, said on Monday top exporter Saudi Arabia, in the midst of a revolution that toppled two presidents, which is affecting the OPEC member Libya, which has pushed prices to record highs in two years.
Several oil ministers arrived in the Saudi capital, Riyadh, to participate in a meeting that seeks to bridge the gap between producer and consumer of oil.

Brent crude on Monday hit $ 108 per barrel for the first time since 2008, driven by fears that a spiral of violence in Libya, stop supplies from OPEC member country.
Some oil companies have announced the withdrawal of its personnel from Libya and one has already halted production of 100,000 barrels per day in that country.

This is the first break from the protests that rocked Tunisia, which have caused the ousting of its president, and then spread to Egypt, where Hosni Mubarak fell after 30 years in office.

The oil minister of Saudi Arabia, Ali al-Naimi, will open the International Energy Forum with a speech on Tuesday, but declined to speak with reporters Monday.

However, his deputy, Prince Salman bin Abdulaziz Al-Saud told a news conference that the market «is sufficiently supplied.»

«We’re much more focused on how is the market equilibrium, is sufficiently supplied and the answer is yes, plenty ‘, so should the situation require some kind of intervention do not think so,» he said. He also reiterated that 70 to 80 dollars is a fair price for oil. «It is justified because it enables producers to invest and it will not harm consumers,» he said.

Although oil prices are well above those levels, OPEC ministers have repeatedly said the market has sufficient supply and that the group has no plans to meet formally to evaluate its production until June.

Pumping policy OPEC group has remained unchanged since December 2008 when it agreed to cut production record of 4.2 million barrels per day. Initially, members of OPEC met strictly with the compromise, but as rising oil reduced the level of compliance with production goals.

It is expected that the major Libyan oil official, Shokri Ghanem, not participate in the meeting in Riyadh, while his compatriot Abdullah Al-Badri, OPEC’s secretary general, arrived in Riyadh without answering questions.

Even if OPEC does not inject more oil to market, Saudi Arabia has about 4 million barrels per day (bpd) of spare capacity and has said he is always ready to supply more crude if necessary. For its part, United Arab Emirates confirmed that OPEC was ready to deliver more oil if necessary but agreed that the market was well supplied.

United States will be represented at the meeting by Deputy Secretary of Energy Daniel Poneman. Asked by reporters on his arrival in Riyadh if he was worried about the current level of prices, Poneman said only: «We believe in the laws of supply and demand.»