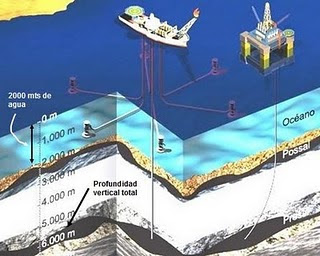 The subsalt geological layer is formed by an extensive layer of salt, which can exceed two thousand meters thick. This would be called mother salt layer, or the original strip of salt accumulation in the ocean. And the geological layer formed after the salt is called post-salting. That means that the sand, organic matter and other debris accumulated in a period subsequent to the original layer of salt.

This form of classification (pre-salt vs post-salting) considers the age of different rock formation where there is potential for the generation and accumulation of hydrocarbons. The term subsalt is yet another way of monitoring the ocean’s layers, which considers only its location relative to a layer of salt, either the mother or any belt layer of salt. In this case we can speak of subsalt (below the salt) or protrude (above the salt), regardless of the geological period in which there was such litter.

In general, most of the subsalt areas are pre-salt that is formed in a period prior to the layer of salt. But, due to tectonic movements, salt Layer can run a geological fracture mother, forming a second layer or strip of salt. This creates a new socket and within this area may have oil generation.

That would be the oil in the subsalt, but in the area of post-salting. In other words, is beneath a layer of salt, but in an area geologically formed after the salt layer.

In the post-salting subsalt Gulf of Mexico

Simões (Brazil) said that there is ample oil exploration in the subsalt the post-salting in the region of the Gulf of Mexico, the United States. Moreover, it is believed that also contains oil reserves in that area in West Africa.

Companies active in the Gulf of Mexico for many years exploited oil in the subsalt the post-salting, or in the area that was formed after the mother layer of salt. «I’ve seen seismic studies that indicate the existence of oil in sub-salt and post-salting of Brazil,» he says. Stresses, however, have not been informed what would these areas.

Twice the pre-salt reserves in Brazil

According to Petrobras, the preliminary tests carried out in four pre-salt areas (three in the Santos Basin and one in the Fields) indicate recoverable volumes of 10,600 to 16,000 million barrels of oil equivalent (oil and gas). If this volume is confirmed, after evaluation of the findings, the Brazilian oil reserves would double. Currently, such reserves reach $ 14,000 million barrels of oil equivalent.