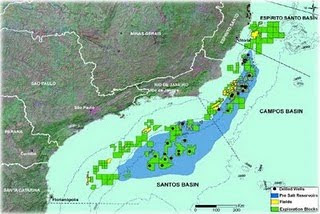 Minister of Mines and Energy of Brazil, Edison Lobao announced on 31 (August 2009) that the government will create a new state oil company called petrosal to manage the reserves under the pre-salt layer of the continental seabed.?
Lobao made the announcement after a meeting coordinated by President Luiz Inacio Lula da Silva on Sunday night to define the details of the new regulatory framework for the exploitation of reserves.?

Lobao said the government sent Congress a bill to create petrosal, a fund for education and fighting poverty and the new regulatory framework, which basically maintained the previous structure of distribution of royalties among Brazilian states.?

That means that states with a coastline are the megarreservas as Espirito Santo, Rio de Janeiro and Sao Paulo, will have a special participation of the resources obtained.?

Prior to the confirmation of the government, shareholders of the state oil company Petrobras – which includes large foreign investment funds – responsible for the discovery of megarreservas had anticipated two weeks ago that they would go to court against the creation of petrosal. ?

The oil and natural gas under the pre-salt layer, approximately 7000 meters below sea level, extending for 800 miles off the coast of the South American country between the states of Santa Catarina and Espirito Santo.

According to official estimates, the Brazilian oil reserves increased by 50,000 million barrels with the exploitation of new fields in deep water.