The hydrocracking is the best process for the production of diesel fuel, catalytic cracking is for the production of gasoline. It comes to selecting the most appropriate charges for these two processes: the cost of hydrocracking leads to the choice of loads easier to transform, in terms of catalytic cracking, flexibility and severity leading to the choice of heavier loads.

Hydrogen needs are greatly increased, it raises the introduction of partial oxidation, at least part of final waste, despite its high cost. The intermediate process of preparing charges also will make an appearance: the direct hydroconversion of vacuum residue, solvent and coquizacin deasphalting improved. 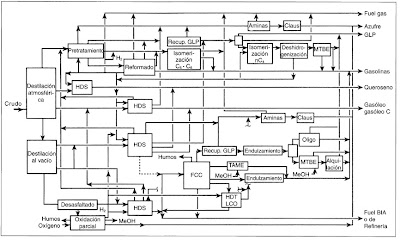 Moreover, the problem of reducing aromatics is mainly focused on the production level of gasoline. The catalytic reforming capacity could decrease and severity. The catalytic cracking should be directed to the production of light olefins. Units etherification, alkylation and oligomerization veran enhance their capabilities. New processes will make their appearance such as isomeración and dehydrogenation of n-butane.