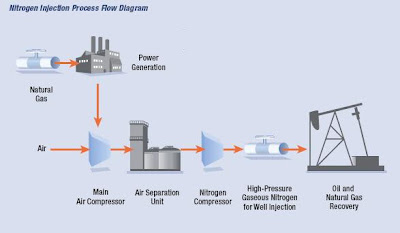 In the recovery of oil from oil bearing reservoirs, it usually is possible to recover only minor portions of the original oil in place by the so-called primary recovery methods which utilize only the natural forces present in the reservoir. Thus, a variety of supplemental recovery techniques have been employed in order to increase the recovery of oil from subterranean reservoirs.
These supplemental techniques, commonly referred to as «enhanced oil recovery,» involve the injection of afluid, or series of fluids, into the reservoir through an injection system comprised of one or more wells. As the injected fluid moves through the reservoir, it acts to displace the oil therein, to a production system composed of one or more wellsthrough which the oil is recovered.

The carbon dioxide may be employed alone or inconjunction with other materials to establish a conditionally miscible transition zone within the reservoir.

Nitrogen and carbon dioxide may also be employed in admixture with one another or with other gases. Examples of inert gases which may be employed in the process includes methane, natural gas, separator gas, flue gas, nitrogen and air.

The nitrogen containing gas is injected at a rate to produce a flow velocity within the formation which is less than the velocity of the previously injected light hydrocarbon. The injection of thepredominantly nitrogen-containing gas is continued at this relatively low rate and in amounts sufficient to strip the previously injected light hydrocarbon from the reservoir oil and form a transition zone of conditional miscibility within the reservoir. The process is carried to conclusion by the injection of a gaseous driving fluid into the reservoir to displace the oil therein to a suitable production system from which it is recovered.

As noted previously, the injection of nitrogen gas can, under appropriate circumstances, result in the establishment of a miscible transition from the reservoir oil. In order for the injected nitrogen to become sufficiently rich with therelatively low molecular weight hydrocarbons to establish miscibility, a number of successive contacts of the enriched nitrogen and the reservoir oil must occur. The movement of the gas and liquid phases through the reservoir may be characterized asinvolving a chromatographic transport mechanism which produces gas-liquid chromatographic separation in the reservoir sand.

The stripping of light to intermediate hydrocarbons from the reservoir oil with the attendant enrichment of the injected nitrogenmay be defined in terms of this chromatographic separation effect. Thus, the enrichment of the injected nitrogen can be related to the number of theoretical plates required for the attainment of gas-liquid equilibrium. By analogizing the reservoir sandto a packed column, the equivalent length of reservoir sand required for the attainment of gas-liquid equilibrium may be explained in terms of the «height equivalent to a theoretical plate» (HETP), familiar to those skilled in the art of liquid-vaporfractionation.

The HETP is a function of the reservoir characteristics and is constant for a given reservoir. The number of equilibrium contacts between the gas and the reservoir oil multiplied by the HETP gives the length of the fluid flow path withinthe reservoir needed to establish sufficient enrichment of the injected nitrogen to produce the in situ transition zone which is miscible in both the gas phase and the reservoir oil. The length of this path at pressures and temperatures normally encountered in subterranean reservoirs is much longer for nitrogen than for carbon dioxide. For example, for a typical reservoir oil having a stock tank API gravity of 35.6° at a temperature of 164° F. and 3334 psia, the path lengthneeded to achieve a conditionally miscible state through the injection of pure carbon dioxide would be about 4-5 feet. Where nitrogen, rather than carbon dioxide is employed as the injection gas, the path length needed to establish a conditionallymiscible transition zone adjacent the injection system is increased materially to a value on the order of 100 feet or more.

The light hydrocarbon slug may be injected at any suitable rate sufficient to produce the desired mixing zone adjacent the injection system. While the flow velocity of the injected fluid within the formation will depend to some extent upon thegravity characteristics of the reservoir, it usually will be desirable to inject the light hydrocarbon slug at a rate sufficient to produce a darcy velocity (apparent velocity) at the light hycrocarbon slug front of at least 2 feet per day.

After the injection of a suitable quantity of the light hydrocarbon, nitrogen is injected in order to establish the transition zone of conditional miscibility adjacent the injection wells. The nitrogen is injected at a rate which produces adarcy velocity less than the velocity of the previously injected light hydrocarbon. Any suitable predominantly nitrogen-containing gas may be employed at this stage of the invention. For example, the injected gas may take the form of substantially purenitrogen such as produced by cryogenic fractionation of air. The nitrogen containing gas may also take the form of fluegases such as from boilers or internal combustion engines which typically will contain about 88% nitrogen, 10% carbon dioxide, 1% carbon monoxide, and the remainder hydrogen and trace amounts of other gases.

As noted previously, the predominantly nitrogen-containing gas is injected at a rate to produce a flow velocity within the formation which is less than the velocity of the previously injected light hydrocarbon slug. The injection of nitrogen iscontinued at a sufficiently low rate to maintain the transition zone of conditional miscibility formed between the nitrogen and the altered reservoir fluid as it is moved through the reservoir and displaces the oil therein. Usually it will be preferredto inject the nitrogenous gas at a rate resulting in a flow velocity within the reservoir within the range of 0.1-1.0 feet per day.

While the process usually will be carried out employing only gas injection, in some instances, a liquid such as water may be employed as part of the driving agent. For example, water may be employed to increase the arealsweep efficiency of the process in the manner of the AGWIP (alternate gas-water injection procedure) technique known to those skilled in the art, or water thickened with a suitable polymeric thicknening agent may be injected for mobility controlpurposes.

This procedure may be carried out in an essentially flat reservoir where the oil displacement is fundamentally horizontal. However, a preferred application of the present is in reservoirs having a pronounced dip, i.e. 10° or more, where the gravitational effects due to the density differentials of the various fluids involved may be utilized to advantage. In this case, the light hydrocarbon and nitrogen are injected through one or more wells located up dip from theproduction wells.