It is normal to find the former, present in the mixture exceeding the values allowed by the rules of transport or environmental or personal safety. For this reason, and the harm they cause, and plumbing equipment (pipelines) to be highly corrosive under certain conditions, it is necessary to remove them.

Remove the components that make an acid gas is then called to sweeten the gas. The selection of a sweetening process, usually performed within a context of cost-effectiveness will depend on several factors:

* Type of pollutants to be removed.
* Concentration of pollutants and the degree of removal required.
* Required Selectivity
* In the case of sulphides, if required sulfur recovery as such.

One of the most commonly used for removal of acid gases is a solution of monoethanolamine (MEA – derived from ammonia). Other chemicals used to remove acid gases are diethanolamine (DEA) and the Sulfinol (mixture of sulfolane, disopropanolamina and water).

The so-called selective amines (eg, MDEA), SH2 preferentially absorb the CO2. Formulated amines, are offered by different firms of process technology, prepared based on MDEA, which improve the performances in treatment plants. 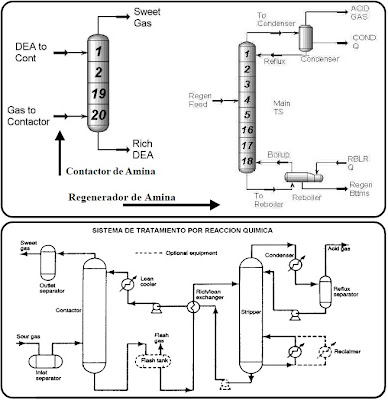 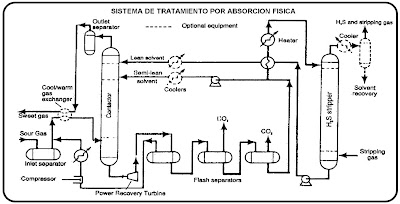 Molecular sieves operate on the same principles already discussed above in other processes of adsorption rate, and are regenerated with heat in the same way as is done in them. Also the use of different degrees of permeability, allowing the passage of certain products selectively.

Simple sulfur is produced from hydrogen sulfide in acid gas through the Claus process, during which provokes a reaction of hydrogen sulfide with oxygen in the air. The acid gas and air react not catalytic combustion in a furnace or boiler fire tube. Most of the gas is cooled to condense sulfur, which is removed.

Part of the hotter gas is combined with the first effluent condenser to obtain the desired temperature input of the first reactor.

The reaction of hydrogen sulfide and sulfur dioxide accompanied by a temperature increase occurs in the catalytic reactor after which the effluent is cooled and sulfur is condensed and removed. The gas from the second reactor is heated by exchange with the effluent from the first reactor.

The subsequent reaction in the second reactor produces more sulfur, which is condensed and removed in the final capacitor. The gas then goes to an incinerator where all other sulfur compound is burned to obtain sulfur dioxide and discharged into the atmosphere.

The conversion of hydrogen sulfide into sulfur can exceed 96 percent in such plants, but depends on the hydrogen sulfide content of sour gas. A third reactor can achieve a recovery of 97 + percent.

Some gas equivalent contain only trace amounts of hydrogen sulfide, but the concentration may exceed several times that specified in the contract for sale of gas.

The sponge iron is iron oxide deposited on wood chips or shavings. The iron oxide is converted to iron sulfide gas sweetening and has a relatively short life.