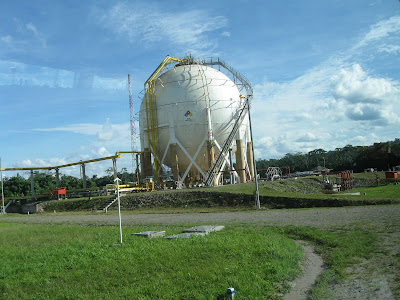 Natural gas hydrates are solid substances in the form of white crystals formed when liquid water and some light hydrocarbons, mainly C1 (methane), C2 (ethane) and C3 (propane), are physically combined under certain conditions of pressure and temperature.Formation of Natural Gas Hydrates
Water molecules in the presence of light gases can form a crystalline structure containing cavities in which gas molecules are trapped. It has been determined that there were 3 crystal structures which can form large and small cavities. The structure I comprises two small cavities and 6 large cavities. Structure II consists of 16 small cavities and large cavities 8. The structure III is formed by 3 types of cavities, with the 3 holes of different sizes, aAs of them much larger than the other 2.

The propane and isobutane molecules can enter only in large cavities of structure II, so a natural gas containing these hydrocarbons form structure II hydrates.

Butane is not a pure state but it hydrates form with other compounds.

* High pressure and low temperatures favor the formation of natural gas hydrates being able to form even at temperatures above the freezing water.
* Presence of liquid water, as a result the water content of natural gas should be decreased to values such that nowhere in the system reaches the dew point gases especially CO2 or H2S containing acid forming condensed water.
* Means of agitation of the water and gas.
* The turbulent high velocity flow, pulsating pressure, agitation, induce the formation of the first hydrate crystals and once this occurs the phenomenon of crystallization is faster.
* The temperature at which hydrate formation begins is obtained from graphs constructed based on experimental data for a specified pressure and gas density as we know it.
* The hydrate formation temperature will be higher as increased gas density.
* Once formed hydrate is no alternative but to reduce the pressure for its dissolution causing loss of gas that is vented to the atmosphere.
* The disappearance of hydrates can be slow and elusive. Macroscopic crystals remain for long periods after the hydrates have disappeared.