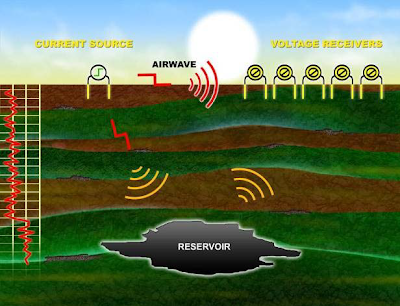 The principle behind MTEM technology is straightforward: by rapidly reversing the voltage between two electrodes, a transient is directed into the earth and the earth’s impulse response is recorded between receiver electrodes. Proprietary processing produces a resistivity cross section of the earth, with high resistors indicating hydrocarbons.

Once data are recorded, the voltage is reversed, producing the next MTEM transient and acquiring another shot. Proprietary software calculates the signal to noise ratio while data is collected, enabling the operator to know in real time when sufficient data for that area has been collected. The source and receiver electrodes are then moved down the line to build up the subsurface picture.

Reciprocity allows the technique to be used in obstructed areas to overcome natural or manmade obstructions (e.g. rivers). Real-time appraisal technique provides a first look at the reservoir in the field within 24 hours of data collection. After noise removal, deconvolution, stacking, and conversion to log-time, MTEM data look much like seismic data. By picking the arrival from the subsurface, the travel time for each sourcereceiver pair is determined in a similar manner to velocity picking in seismic processing.

Mapping produces a plot of resistivity against depth to confirm the presence or absence of resistors such as petroleum. State of the art inversion methods using travel times and absolute amplitudes can be used to produce more advanced products. MTEM can thus be a direct hydrocarbon indicator, in contrast to seismic, which primarily detects lithology.