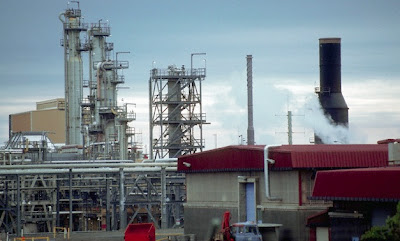 Methanol (CH3OH) is an alcohol fuel, is methane (CH4) with one hydrogen molecule (H) replaced by a hydroxyl radical (OH). The typical feedstock used in the production of methanol is natural gas. Methanol also can be made from renewable resources such as wood, municipal solid wastes and sewage.
The methanol manufacturing process typically involves heating natural gas, mixing it with steam and passing it over a nickel catalyst, where the mixture is converted into reformed gas: carbon monoxide, carbon dioxide and hydrogen, also known as synthesis gas. Conventional steam reforming is the simplest and most widely practised route to synthesis gas production.
2 CH4 + 3 H2O -> CO + CO2 + 7H2 (Synthesis Gas)

The synthesis gas is then cooled, compressed and passed over a copper-zinc catalyst to produce crude methanol. Crude methanol consists of approximately 80% methanol and 20% water.

Crude methanol is then distilled to remove water, higher alcohols and other impurities and produce chemical grade methanol. 1 tn of methanol requires 30 million BTU of methane.

Methanol is a liquid commodity chemical typically used as a feedstock in the manufacture of other products. Roughly three quarters of all methanol is used in the production of formaldehyde, acetic acid and a variety of other chemicals which form the basis of a large number of chemical derivatives. These derivatives are used in the manufacture of a wide range of products including building materials, foams, resins and plastics.

The remainder of methanol demand comes from the fuel sector, principally as a component in the production of MTBE, which is blended with gasoline as a source of octane and as an oxygenate to reduce the amount of emissions from motor vehicles. Methanol is also being used on a small scale as a direct fuel for motor vehicles and is actively being considered as a preferred fuel for fuel cells.

As a basic chemical building block, methanol is also used in the manufacture of methylamines, formaldehyde, acetic acid; methyl methacrylate and a diverse range of other chemical derivatives, which in turn are ultimately used to make such products as adhesives, coatings, plastics, textiles, paints, solvents, paint removers, polyester resins and fibres, explosives, herbicides, pesticides and poultry feed additives. Other end-uses of methanol include silicone products, as a substitute for chlorofluorocarbons in aerosol products, as a de-icer and windshield washer fluid for automobiles and as an antifreeze for pipeline dehydration.