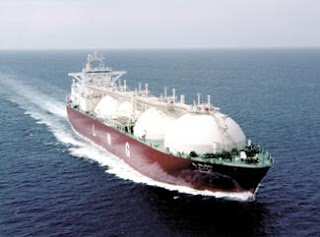 Kuwait will start importing 500 million cubic feet (14.2 million cubic meters) of liquefied natural gas (LNG) daily from Qatar by sea at the end of this month, a top oil official said on Tuesday.

Deputy chairman of national refiner Kuwait National Petroleum Co Asad al-Saad told the official KUNA news agency the company will complete a special platform for taking delivery of LNG shipments in a few days.
The imports will be used to supply power and water desalination plants when demand rises sharply during the summer months in the desert state, he said.
A few months ago, the two Gulf states signed an agreement for gas imports by vessel after a plan to have the gas piped through Saudi Arabia failed when the kingdom refused to allow this because of political differences with Qatar.
Kuwait, the fourth-largest OPEC producer, is rich in oil but short on natural gas despite a huge discovery in 2006 of 35 trillion cubic feet (one trillion cubic meters) of free gas.
The emirate currently produces around one billion cubic feet of associated natural gas and 150 million cubic feet of free gas daily, but that amount is insufficient to meet increased demand for power plants and water desalination.