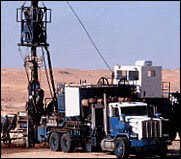 1. Rheology
Rheology is the science which deals with the deformation and flow of matter. The use of rheological values in cement grout and drilling mud allows us to calculate the following parameters:

• The annular velocity and flow rate of pumping necessary to achieve a plug flow laminar or turbulent.
• The speed inside the pipe.
• The pressures of friction of the grout and drilling mud to
circulated through the well.
• The hydraulic power needed.
• The volume of grout, mattress cleaners, etc.

2.1. CUTTING EFFORT: When a fluid is flowing, there is a force in the fluid which opposes the flow. This force is called shear. Can be described as an effort of friction that occurs when a fluid layer slides over another. The shear stress (τ) represents the pounds of force per hundred square feet (lb/100 ft2) required to maintain cutting speed.

Based on flow behavior, fluids can be classified into two types: Newtonian and non-Newtonian.

3.2. Non-Newtonian fluids
Many cement slurries exhibit a very complex non-Newtonian behavior. Generally the viscosity is a function of cutting speed and cutting performance. It must distinguish between thinning fluids in which the viscosity decreases with increasing cutting speed and dilatant fluids where the reverse occurs. In general we can say that the cement grout fall into the first category and the most widely used rheological models to describe the properties of the slurry are the power law model and the Bingham plastic model.

FLOW OF BINGHAM PLASTIC MODEL
This model describes a fluid in which a finite force is required to initiate flow (yield point) and then shows a constant viscosity when the shear rate increases (plastic viscosity). The model equation for Bingham plastic flow is:

FLOW MODEL OF THE LAW OF POWER LAW EXPONENTS O
This model describes a fluid in which shear stress increases with high cutting speed mathematically some power. Mathematically, the power law model is expressed as:

4.1. PLUG FLOW
Literature justified by many arguments that the rate of flow suitable for cementing a well is turbulent flow, but there are situations where it is not possible to turbulent flow for reasons such as:

• Geometry of the well.
• Rheological properties of the fluid.
• Restrictions on pressure.

When these situations the fluid type recommended is the cap, which presents the following characteristics:

The main features presented by this flow profile are:

This type of profile is the preferred long as the downhole conditions permit, often have to reduce the rheological properties of cement grouts, adding additives that reduce friction losses, etc..

4.3. LAMINAR FLOW
The main features presented by this flow profile are:

4.4. TRANSITION BETWEEN FLOWS
The Reynolds number is a value, which indicates that the transition point there is a flow profile to another, depending on certain circumstances.

In the range 2100-3000 can not precisely define the flow profile and this point is called the transition zone. When plug flow is cemented in most reports indicate that only 60% can be removed from the mud, but if you have had good pre-flow, you can get more than 95% removal of mud. According to studies, it is clear that in turbulent flow can be achieved removals of greater than 95% mud.