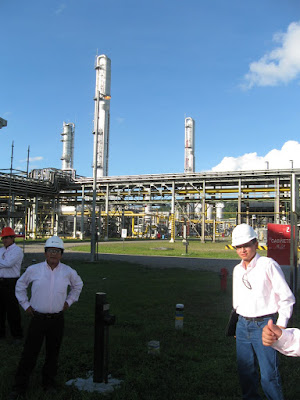 Researchers have strived to find a way to efficiently convert natural gas directly to usable liquid fuel via gas-to-liquids (GTL) processes since German scientists Fischer and Tropsch successfully converted coal to liquid fuel in the 1920s. Though large sums of money and effort have been invested in improving GTL technology, converting methane to longer chained hydrocarbon compounds remains an energy-intensive process.
Though SASOL has been operating large coal-to-liquids plants in South Africa since the 1950s, the next commercial plant was ExxonMobil’s gas to methanol to gasoline plant in New Zealand in 1985. This was followed by Shell’s first large-scale (greater than 10,000 bpd) GTL plant in Malaysia in 1993. From 1994 to 2005, no new full-scale GTL plant was commissioned, though a number of pilot projects and units were constructed within existing oil refineries. During that time period, however, saw a number of major announcements regarding projects in Qatar and a number of other gas-rich countries.The most commonly cited end products for recently announced GTL projects have been diesel, lubricant base stocks, and petrochemicals.

It is particularly important in developing countries where trucks and buses – instead of private gasoline vehicles – dominate the transportation systems.

In an oil refinery, the process of temperature distillation separates long chains of liquid hydrocarbons (C15 and higher crude oils) into smaller chains, separating diesel, gasoline, naphtha, kerosene, and lighter gases from crude oil. Unfortunately, this relatively simple process retains most of the impurities from the original crude oil in the resulting products. Removing these impurities is expensive and requires sophisticated process units. If the impurities, especially sulfur, are not removed, they are eventually released into the atmosphere (as SOx and NOx) from diesel engines of buses, trucks, and power generators.
GTL aims to produce clean diesel and other transport fuels by “going the other way,” or by joining methane-rich hydrocarbons into the required length of diesel and other fuel compounds by using catalyst reactions. GTL processes can also be modified to produce other liquids, such as naphtha (feedstock for petrochemicals), lube oils, and LPGs. They may either be sold at a premium price directly to the market or blended to upgrade lower quality product into higher grades. Keeping GTL fuels separated from conventional (and thus, dirtier) fuels would require separate storage, transportation, and retailing infrastructure, potentially reducing the price advantage.

Many in the industry consider GTL as the “holy grail” of gas technology. The main reasons for this pursuit are the desires to:

Today require extremely cheap input gas, consume 40% or more of the original energy content of gas in the process, and, in many cases, are unproven on a large commercial scale.

All of the GTL technologies are based on the original Fischer-Tropsch chemical process. This process converts a synthesis gas mixture of hydrogen and CO called syngas into longer chained intermediate products such as liquid fuel and various petrochemicals. This is accomplished using iron-, nickel-, or cobalt-based catalysts.

Assuming that a plant of 2,000 b/d can be constructed and operated economically, it would require a gas field with reserves less than 200 bcf over 25 years. Using an average of 101 MMcfd per 10,000 bbl, and assuming that most of the output is diesel-equivalent, the GTL conversion process requires 101,000 MMBtu to produce 58,250 MMBtu of product. (One barrel of diesel contains 5,825 MMBtu.) Stated differently, 42% of the input energy gas source is consumed in the process to produce the output energy liquid product, resulting in overall efficiency of around 58%.

The last few years have been tough on promoters of GTL. Most of the plants that were proposed in Qatar have been cancelled (ConocoPhillips and Marathon in Qatar, and all other Nigerian plants) or converted to LNG projects (ExxonMobil’s plant in Qatar). Other plants, such as Sasol’s Oryx GTL in Qatar have had serious process issues and are operating much below their capacities. Shell’s Pearl project is going ahead, but its capital cost may be much higher than initially estimated.