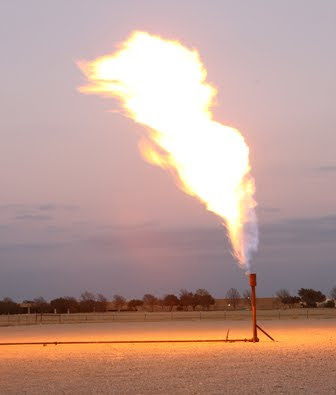 A flare (flaring) (burner) is the result of controlled burning of natural gas from a well-a sure way to test the performance of a well. Burning is a common practice for oil and gas industry as well as many other industries.

How is burning (gas flaring process)?
The process involves directing the burning of gas in a vertical pipe and turn it on. This raises the controlled flame from the stack and is never large enough to extend beyond the perimeter of the site.

Why was carried out by the burning gas (gas flaring)?
By burning gas more efficiently evaluates a natural gas well in their capacity (well testing) and if it will or not economically viable and on that basis determine the areas where the pipelines are needed to begin moving gas to market. In urban areas, construction of natural gas pipelines often involve many areas of land and extensive negotiations of right of way for the development of a natural gas pipeline project.

Is it safe burning of gas (Gas Flaring)?
Before any producer of natural gas can burn a hole, a permit is required by the entity in a given country, the regulator of the natural gas industry in the state. The process is closely monitored on site 24 hours a day during the short period of time the burning takes place – usually a few days.