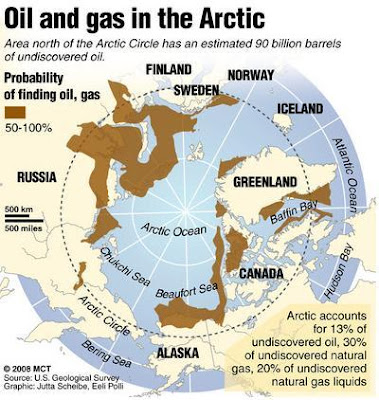 Industry.bent.com Enero 2010.- ExxonMobil could be ramping up its Arctic exploration intentions with reported plans to commission a rig able to withstand the brutal and ice-covered regions such as offshore Greenland and Alaska. The biggest U.S. oil company is looking to sign a contract for a Transocean rig capable of drilling in Arctic waters and which is estimated to cost up to $1 billion to build, Reuters reported.
Transocean CEO Bob Long said in September his company could announce a new arctic-class rig with a contract by the end of 2009. The announcement has yet to occur, but some have speculated Exxon was tied up with its acquisition of independent unconventional natural gas producer XTO Energy.

Exxon has long been interested in the Arctic and has an increased its acreage in the Beaufort Sea and is in different stages of planning and assessment in areas offshore West Greenland, eastern Canada and Newfoundland.

And why not? Offshore drilling in the Arctic has become more attractive and accessible as the annual summer ice thaw increases, leaving more open water. In 2008, the United States Geological Survey determined the estimated undiscovered technically recoverable conventional oil and natural gas resources was about 412 billion barrels of oil equivalent. Seventy-eight percent of those resources are expected to be natural gas and natural gas liquids.

The Arctic’s apparent richness in natural gas and NGL may impede the exploitation of the resource, according to the Energy Information Administration, because much of the world’s natural gas consumers live far from the Arctic. And that makes the development of pipeline projects like the proposed (and now long-awaited and over budget) MacKenzie Valley Gas Project key to Exxon’s Arctic plans.

A federal review panel issued a detailed report last month endorsing the 800-mile pipeline project and concluded it “would deliver valuable and lasting overall benefits and avoid significant adverse environmental impacts.” The report issued by a joint review panel is only one of the many hurdles remaining on the project, which would ship up to 1.9 billion cubic feet of natural gas daily from the Beaufort Sea to Alberta. The project is far less economical than shale gas plays in the United States, for example.