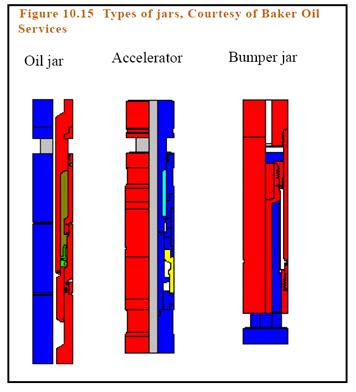 Jars provide a means of supplying powerful upward or downward blows to the stuck drillstring.
A jar is a mandrel which slides within a sleeve. The free end of the mandrel is shaped in the form of a hammer to provide a striking action against the face of the anvil.

Depending on the type of tripping mechanism, there are two basic types of jar: mechanical and hydraulic. Mechanical jars have a preset load that causes the jar to trip; hammer striking the anvil. They are thus sensitive to load being used and not to time.Mechanical jars are pre-set at surface.

Hydraulic jars use a hydraulic fluid to control the firing of the jar until the driller can apply the appropriate load to the string to give a high impact. This controlled action (delay) is provided by hydraulic fluid which is forced through a small port or series of jets. Hydraulic jar firing delay is dependent upon the combination of load and time. Hence hydraulic jars are adjustable according to downhole overpull.
Oil jars: provide means for applying upward blows to release a stuck pipe.

Accelerators: store energy above the drillcollars in order to increase the impact efficiency of oil jar.

Bumper jars: provide free travel to assist in engaging the fish and to allow downward blows to be transmitted to the fish.and for releasing overshots downhole and at surface.

In general, an increase in jar stroke length increases the jarring effect. With these obvious advantages, a long stroke hydraulic jar is preferable to a mechanical jar.

The smaller the quantity of drill collars, the higher the impact force. Conversely the larger the number of drill collars the greater the impulse force. A compromise has to be reached where both impact and impulse are working together to free the pipe.

The jars should be run in tension wherever possible. This is mandatory for mechanical jars.

For hydraulic manufacturers state that they can be run in compression however this is not advisable as inadvertent cocking of the jar is possible with applied WOB.

For vertical wells the amount of drill collars to be run below the jar should be the sufficient to allow the required bit weight and place the neutral point at least 30 feet away from the jar.

The amount of drill collars to be run above the jar will depend upon several factors depending on the type of jar run.

For highly deviated and horizontal wells it is recommended that the jars are not placed in the horizontal or maximum inclination section. This can be achieved by running a longer than normal string of HWDP to ensure the jars are placed in the tangent section where possible. The frictional drag in horizontal sections severely reduced both impact and impulse of the jar. In addition the jars become difficult to cock and trip. Placement of the jars in the horizontal section is therefore considered to have minimal benefit.