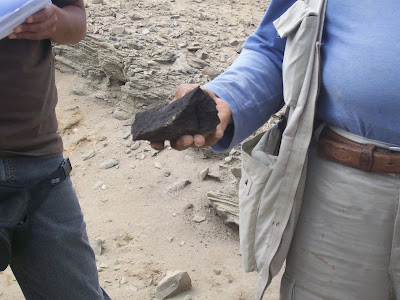 1) Organic matter that can be extracted from sedimentary rocks with organic solvents such as benzene, chloroform, or carbon disulfide. Bitumen is in contrast to kerogen in sedimentary rocks that is not soluble in organic solvents.
2) The solid hydrocarbons that occur in sedimentary rocks. Bitumen is fusible below 150°C and is inflammable. It has a variable color, hardness, and volatility. Native bitumen is formed directly from organic matter in sediments and is also called kerobitumen. It is composed of C22 and heavier molecules. An example is ozocerite. Reservoir bitumen forms from degraded hydrocarbons in the reservoir and can be graphitic or asphaltic.

3) A term used interchangeably with both liquid and solid forms of petroleum and includes crude oil, asphalts, mineral waxes, and asphaltines.

Bitumen is an old term that was used to describe oil seeps. Bitumen in England is known as asphalt in the United States.