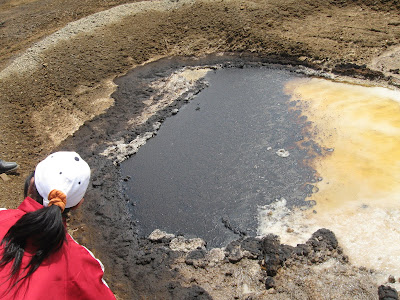 The problems related to asphaltene precipitation may occur in the reservoir in the well, surface facilities, transportation of crude oil and even prosecution.

The main problem for this study asphaltene precipitation in the reservoir.

During the journey of oil through pipelines either in the well or surface, asphaltenes can be precipitated by the presence of ferrous ions combined with acidic conditions, this leads to the formation of solids known as «mud asphaltene» obstructing the free flow oil.

A level of processing, asphaltenes cause a general limitation in removing sulfur from crude oil during refining, so the percentage of refined oil decreases.

The main problems caused by asphaltene precipitation in reservoir level are: changes in the wettability of the rock, stable emulsions blockade and reduction of absolute permeability of the reservoir by tamponade.

Asphaltenes due to their high polarity, aromaticity and high molecular weight are adsorbed
high surface energy present in the reservoir, these are the rock surface and water-oil interface, depending on the area for which they are adsorbed is the resulting damage to the site, if the damage is the first amendment to the wettability, if the latest damage is blocking water-oil emulsion.

Clean mineral surfaces are strongly wetted by water. When in contact with an aqueous phase, are loaded: positive, neutral or negative depending on the zeta potential of the surface. When adding oil to the system, or active polar molecules present in crude oil, asphaltenes tend to become unstable thus giving a travel through the water layer separating the crude rock and be absorbed by the charged surface in this case rock.

The polar portion of the asphaltene molecule is pointing toward the rock surface while the polar portion pointing away from the rock leaving a preference to be wetted by oil, which reduces the effective permeability to oil production losses and finally and recoverable reserves.

When asphaltene molecules are adsorbed on the oil-water interface is due to strong intermolecular dipole-dipole interactions, hydrogen bonding, electron exchange and acid-base interactions, thus forming a viscoelastic film around water droplets dispersed in oil . This film inhibits the mobility of asphaltenes oil to stabilize oil in water emulsion.

When water droplets are dispersed in a non-wetting oil phase, the effective permeability of the medium decreases oil because oil to flow through the porous medium must expend energy to achieve warp viscous emulsified water droplets.

The amount of energy required is directly proportional to surface area of the drop. If viscous forces are not sufficient to overcome the capillary forces holding the drop of water inside the pore body, the flow channels are blocked and as a result the flow of oil into the well is reduced.

The possibility of damage by asphaltene precipitation is not strictly dependent on its high amount in the oil, but most of their stability. The stability of asphaltenes in turn depends on the pressure, oil temperature and composition.

Operational and thermodynamic conditions that contribute to destabilization, precipitation and subsequent adsorption of asphaltenes can be simplified as follows: