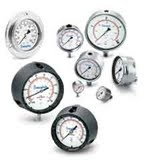 ASME B40.100: Pressure Gauges and Gauge Attachments
Publication Date: Jan 1, 2005ASME Standards Committee B40 is comprised of a balanced cross section of pressure gauge users, manufacturers, and interested members representing governmental agencies, testing laboratories, and other standards-producing bodies. All are convinced that national standards such as this one serve not only to provide product performance and configuration guidelines, but also to inform and update the specifier and user regarding the science of pressure gauge production, application, and use.