The areas of largest condensed gas in the world include:

Proven reserves of the Arun gas field supply 6 LNG trains, each with a capacity of 8 million cubicmeters of feed gas per day. The gas field has 4 clusters of producing equipment. Each cluster has 16 producing wells with cooling and separating facilities.A portion of the gas produced from the Arun gas field is re-injected back into the reservoir. Natural gas liquids (NGL) are extracted from the re-injection stream.
Separation of the NGL mixture into propane, butane and condensate is done at the Arun plant LPG facilities. 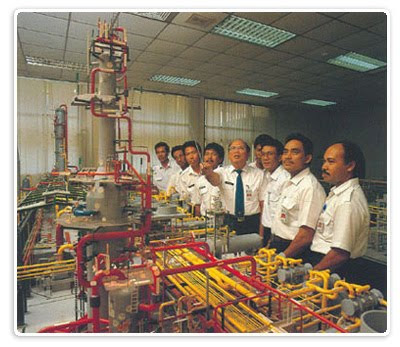 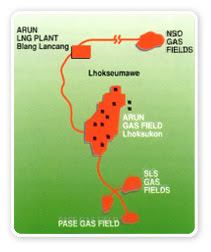 The Arun LNG plant, owned and built by Pertamina is located at Blang Lancang, Lhokseumawe region, in the special province of Aceh along the northern coast of Sumatra.

The plant location was chosen because it satisfactorily met the criteria of access to deep water, proximity to the gas field, and minimum site preparation costs.

The decision to build the Arun LNG plant followed the discovery in 1971 of one of the world’s largest gas reservoirs by Mobil oil Indonesia Inc. working under a production sharing contract with Pertamina.

PT. Arun NGL Company’s well publicized success has exceeded expectations and the plant is presently one of the largest LNG processing facilities in the world.

As the nation’s reliance on LNG revenues continues to grow, the challenges confronting PT. Arun also increases. Some of the major challenges are human resource development; mastery of advanced technologies; new growth in a competitive market;daily operational demands which require optimum levels of safety and security; maintaining, stabilizing and improving upon production levels; and increasing the realibility of plant performance.

Construction of the Arun LNG processing facilities, which initially consisted of 3 LNG trains, was set in motion in late 1974 by Bechtel Inc., as the main contractor. Mobil Oil Indonesia Inc., as Pertamina’s production sharing contractor, discovered, developed and presently operates the Arun gas field which provides the entire feed stock for the Arun LNG plant.

Feed gas was first introduced into the plant in March 1978. Train 1 yielded its first drop of LNG in August 1978, train 2 in September 1978 and train 3 in February 1979. Condensate production commenced in May 1977. The Arun LNG processing plant is operated by PT Arun NGL Co., a non-profit operating company. PT Arun NGL Co. is owned by Pertamina (55%), Mobil Oil Indonesia Inc. (30%) and JILCO (Japan Indonesia LNG Co. – 15%), which represents the buyers.

In early 1981, the gas treating units of Trains 1, 2 and 3 were modified to increase the capacity to 115% of their original design of 1.7 million tons of LNG per train per year. In 1982, the Arun plant expansion program started with 2 additional trains (4 & 5). This expansion increased annual production capacity by an additional 3.4 million tons, all of which was exported to Japan. The expansion project was awarded to Chiyoda Chemical Engineering and Construction Co Ltd., in association with Mitsubishi Corporation and PT Purna Bina Indonesia.

The contruction of the LPG facilities was started in February 1987. The project included extraction facilities in the Arun gas field and at the Arun LNG plant. Separate LPG storage and loading facilities located at the Arun LNG plant were also built. This project was awarded to JGC Corporation and was completed in October 1988. In order to fulfil targeted production assigned by the buyers, a capacity improvement project was initiated in 1990 and completed in 1993. Several pieces of LNG Trains equipment were modified and the plant capacity now reaching 138% of their original design capacity. These modifications increase the yield to more than 2 million tons of LNG per train per year. 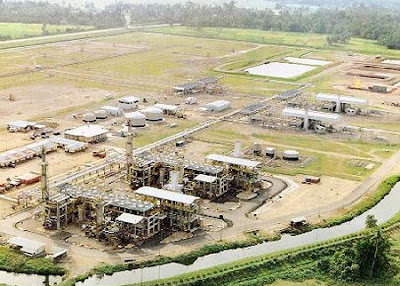 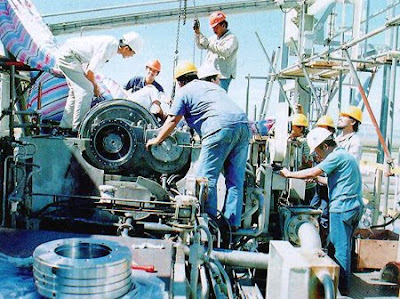 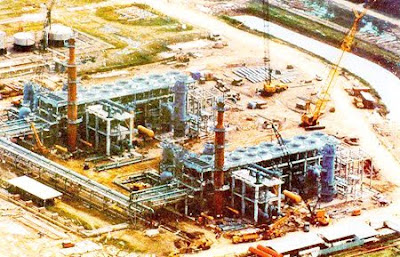 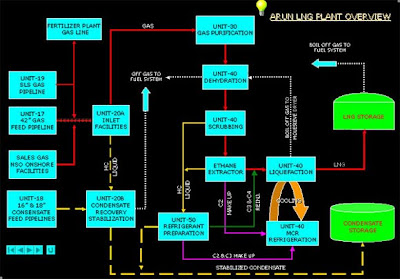 PT. Arun NGL operates Arun LNG plant, which includes the Condensate and LNG facilities. The LNG facilities include separation, treating, fractionation and storage and loading. Instead of uses some processes to produce stabilized condensate and Liquefied Natural Gas (LNG), there are also two facilities that used to produce LPG’s but no longer in operation.

The overhead vapor from First Stage Flash Drums will flow to LNG processing Units that referred as «Train» consists of Gas treating Unit ( Unit-30 ) where the impurities such as mercury (Hg), carbon dioxide (CO2) and hydrogen sulfide (H2S) are removed from the feed gas and then the sweet gas outlet Unit-30 goes to Liquefaction Unit ( Unit-40 ) where it is dehydrated to remove water content, cooled by using propane refrigerant and fractionated in scrub tower to remove heavy hydrocarbon from the feed gas. The lighter ends such as methane, ethane, propane and some butane are sent through the Ethane Extraction Unit ex LPG plant to recover ethane and propane plus to be prepared for MCR refrigerant components.

Residue gas outlet this unit (mostly ethane and lighter component) is boosted by the Residue Gas booster compressor and flow to the Main Cryogenic Exchanger in Unit-40 for liquefaction. The Scrub Tower bottom containing some mostly ethane, propane, butane and heavier hydrocarbon components become the feed to Fractionation/Refrigerant Preparation Unit.
Once the gas is liquefied in Main Cryogenic Exchanger ( spiral wound exchanger type ) using mixed refrigerant system that referred as «Mixed Component Refrigerant (MCR)», then pumped to storage tank and subsequent marine loading. MCR system receives a make up stream from Refrigerant Preparation Unit and Ethane Extraction Unit; the mixed-component refrigerant is pre-cooled by propane refrigerant system before circulated in the Main Heat Exchanger to liquefy the feed gas.