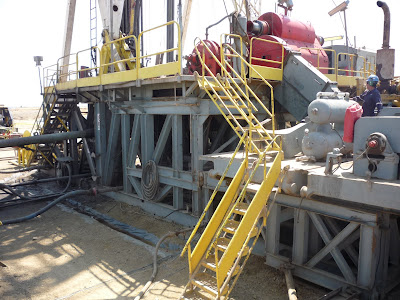 Air drilling rotary drilling uses compressed air instead of a circulating mud system. The air is supplied by a skid-mounted air compressor and diesel engine that delivers 300-500 ft3 of air per minute at 300-600 psi. Three to five compressors are used. The air is pumped down the mud line. The top of the bell nipple is fitted with an air drilling head to prevent the air from flowing out the top of the bell nipple.
Conventional roller cone bits are used. The air and well cuttings come up to to the surface through the annulus of the well and blow out through a blooey line into a blooey pit. The circulation is controlled by a standpipe valve on the rig floor. More weight is put on the bit and less rpm’s are used compared to drilling with mud.
Air drilling is two to five times faster and less expensive than mud drilling but cannot effectively control abnormally high pressures or build a filter cake to stabilize the well. It is ineffective when too much water enters the well. The water, air, and dust can form mud rings that stick to the bottom hole assembly. Air drilling, however, alleviates the problems of formation damage and lost circulation, but there is a danger of an air-methane explosion.