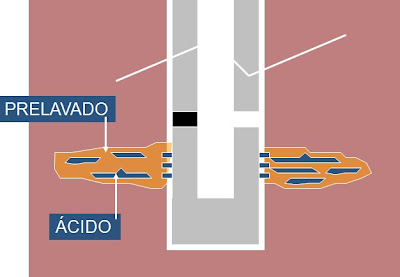 The aim of this type of treatment is to inject acid into the fracture created in the formation at a pressure high enough to open natural fractures or fracture-break-training. The method is widely used in dolomites.

Initially, a cushion of fluid is injected at a rate higher than the parent can accept so as to cause an increase in pressure high enough to overcome the compressive land and tensional stresses in the rock. At this point, training fault rupture and form a fracture.

The injection rate must be high enough and the formation permeability is low enough so that the fluid loss is not excessive so that the pressure may increase enough to fracture the formation or opening existing natural fractures.

Acids are used (acidification of wells) to record the faces of the fractures they are not promoting partners through the creation of channels or «worm-holes» to prevent complete closure in carbonate formations. The recorded fracture acts as a channel of high conductivity to move fluids to the vicinity of the well more easily.

In wells with low to medium temperature control fluid loss of the acid is the most important consideration. In high temperature wells, the effective penetration distance of the acid is limited by rapid consumption, therefore, should be used retarded acid (gelled and / oreticulados).

– The mattress pumped, freshwater or low salinity, followed by high-density acid
– The higher the acid concentration will be higher density.